While on his most recent trip to the Middle East this year, two-division world champion Badou Jack took part in an interview and photoshoot with Men’s Health Middle East that is featured in the current issue of the magazine.

The December-January issue hit newsstands on Saturday, December 1 and shows Jack going through his training regimen and discussing his trips to the region, amongst other topics.

“This is my fourth time in the UAE this past year and I love it, it’s like a second home,” said Jack in the magazine. “I like the mix of cultures. There are people from Europe, from the States, from the Arab world, from Africa, Asia, everywhere. There’s no discrimination here.

“People have shown me a lot of love and I think they see I want to be a good role model, not just for other Muslims, but everyone. I’m trying to be the best I can be.”

Jack also delved into his mindset on training with the renowned magazine and mentioned details of what makes up his training camp routine.

“We have it all mapped out from the start, but of course there is a level of flexibility — you have to listen to your body,” Jack told Men’s Health Middle East. “We swim, we run up the mountain we spar 12, 13, 14 rounds, we do sprints, weightlifting. Everything is hard.

“When amateurs ask me for advice I always joke, ‘pick another sport’. You need to have so much patience. From the start of your career, then moving through the ranks. And the training to prepare for each fight — it takes so much time. It takes a lot of blood, sweat and tears.” 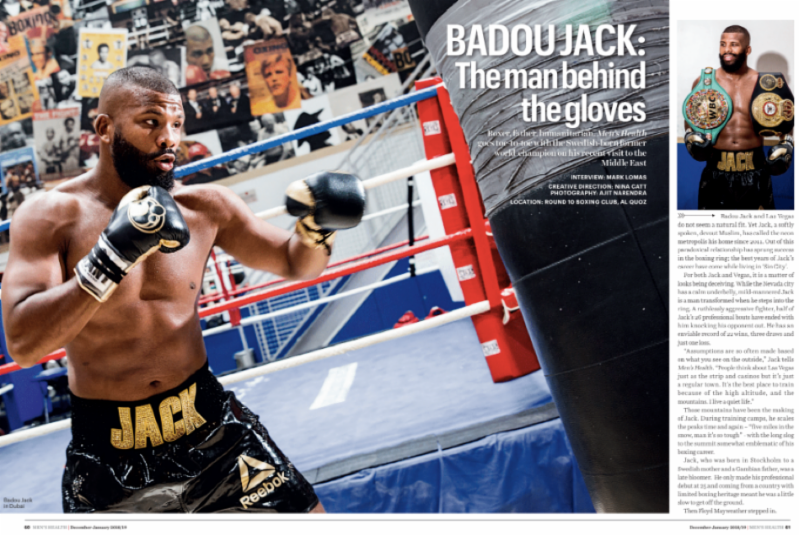 As Jack continues to gain acclaim across the world, “The Ripper” looks forward to returning to action in early 2019 while continuing his humanitarian and business efforts outside of the ring.