The last male American boxer to capture an Olympic gold medal, Andre Ward, will be honored tomorrow night, when he is inducted into the USA Boxing Alumni Association Hall of Fame.

The 34-year-old Ward will be inducted into the USA Boxing Alumni Association Hall of Fame in Salt Lake City, along with Class of 2018 members Roy Jones, Jr. and Claressa Shields, as well as the late Emanuel Stewart and Tom Cleary.

Not only is he the last American male boxer to garner Olympic gold, which he did in 2004 in Athens, Greece, Ward is the last to do so for Team USA.

“It (last American male boxer to win Olympic gold) has never crossed my mind and it’s bittersweet,” Ward remarked. “On one hand, it’s kind of cool to be the last to do something for so long but, on the other hand, I’m eager for that streak to be broken.

“It’s time that the United States of America take its rightful place at the top of amateur boxing, like it once was, and in 2020 I predict Gold…lots of it!”

“It’s an honor and a privilege to be inducted in to the USA Boxing Alumni Association Hall Fame,” Ward said.

“It’s even sweeter to be inducted with this year’s other inductees and the icing on the cake is going in to the hall of fame with Roy Jones, Jr., my all-time favorite fighter.

“Being ranked No. 1 in the country since I was 17-years-old afforded me the opportunity to travel the world, train alongside the other top United States boxers, and the chance to face international competition leading up to the Olympics played a big part in my Olympic success.” 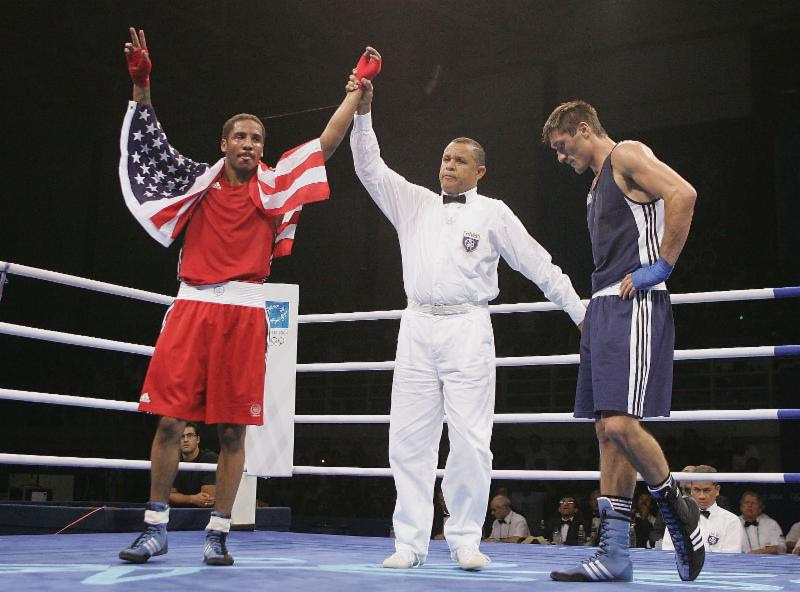 Ward, who lives in Oakland (CA), started boxing in 1994 at the age of nine. He finished his brilliant amateur career with an amazing 115-5 record, highlighted by his gold medal performance at the 2004 Olympics. He also was a two-time U.S. National Championships (2001 & 2003) winner, in addition to a 2002 Under-19 National champion.

“As the youngest USA Boxing alum to win a men’s Olympic gold medal, Andre has inspired present and future generations of champions,” said Chris Cugliari, USA Boxing Alumni Association Executive Director. “He is a champion in every sense of the term — for his intelligence, skill, and work ethic demonstrated throughout his career as well as his professionalism and character outside of the ring. The USA Boxing Alumni Association is thankful for Andre’s contributions to amateur boxing and look forward to honoring him as part of this year’s Hall of Fame class.”