‘Popeye The Sailor Man’ returns this Friday night in Charlotte

Undefeated prospect Richard “Popeye The Sailor Man” Rivera will take his act South this Friday night, when he fights Joshua Robertson in a “stay busy” fight on the “Boxing Bash” card, presented by Christy Martin Promotions, at Centerstage@Noda in Charlotte, North Carolina.

Rivera vs. Robertson, contested at a 185-pounds catchweight, will be co-promoted by Rivera’s promoter, Hartford Boxing Promotions.

Now, though, it’s Rivera’s time to shine. Arguably the hardest-hitting, most popular fighter in New England, Rivera hit Randy Campbell so hard this past April in New Hampshire that the force of his powerful right broke his opponent’s ankle only seconds into the contest.

Rivera has developed a strong fan-base throughout New England and now he’s bringing his “Popeye” persona to the South for the first time. “This is a good opportunity to expand my ‘Popeye’ brand,” Rivera said. “My last fight was in Mexico and this fight is in North Carolina. We’re on our way to going worldwide. I have a lot of family in North Carolina, Fayetteville and Raleigh, so I won’t be alone down there.

“I believe 2019 won’t be much different that my first year as a pro. I’ll be getting a lot of fights and I think that, by the end of next year, I’ll be fighting for something big. I stay in top shape in case a good opportunity comes around. I’m confident and I’ve really benefitted from being Joe Smith’s sparring partner. This fight is about staying sharp because I don’t like having too much time off. The plan is to fight in a different part of the country, get a victory, and then remain in top shape.”

The wildly popular Rivera originally got his nickname because, when he was younger, his forearms were considerably larger than his biceps. Fighters in the gym jokingly teased Rivera about his enlarged forearms, calling him “Popeye,” and the nickname has stuck. Now, Rivera showcases his Popeye persona in full, which has added many females and children to his growing fanbase, and he attributes his wins to eating his spinach to be good to the finish.

“Fighters today need to be more than talented,” added promoter Christy “The Coal Minder’s Daughter” Martin, the two-division world champion who was a women’s boxing pioneer. I haven’t seen him (Rivera) fight yet, but I’ve been impressed by what I’ve heard about him. He’s a great addition to our card. Rivera is a big guy with power and everybody wants to see big guys. But he’s also smart, marketing wise, by capitalizing on ‘Popeye.’ He gets it.” 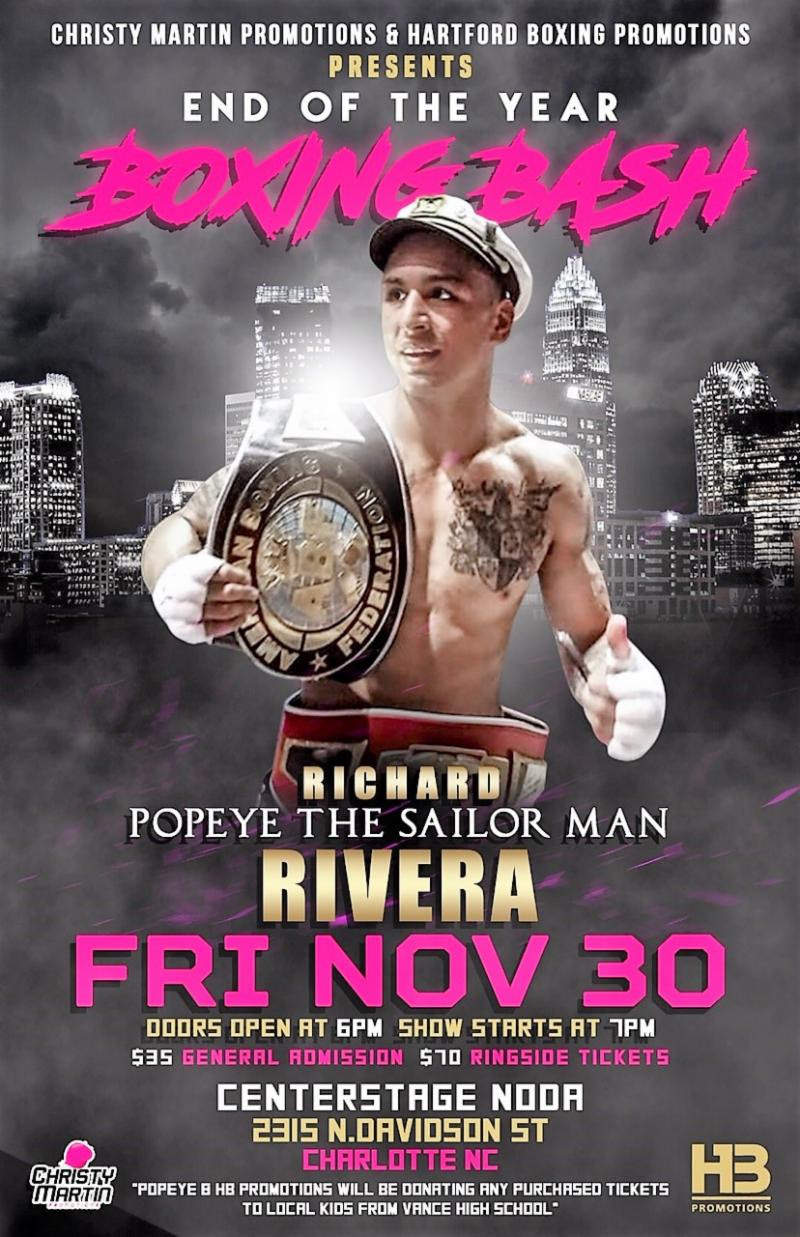 Blanco connected with Martin through social media and, as he explained, things went smoothly from there to place Rivera on that card. “We want to keep Richard busy and then have a breakout year in 2019,” Blanco noted. “The beauty of Richard is that he stays busy and works hard, sometimes when he’s training by himself. Boxing is his job and I believe he’s destined for greatness.”
Robertson (7-11, 2 KOs), of Lynchburg, Virginia, has fought the likes of unified world junior middleweight champion Jarrett Hurd, former USBA middleweight title holder Luis Arias, and ex- WBC FECARBOX welterweight titlist Thomas LaManna.

Tickets are priced at $70.00 (ringside) and $35.00 (general admission and available to purchase at the venue.