Scottish boxer Ronnie ‘The Shark’ Clark is selling his prized possession following the withdrawal of his latest opponent.

Clark won the IBF European Super-Featherweight title when upsetting Zelfa Barrett in February. The 33 year-old has since been disappointed as no fewer than three fights collapsed.

The southpaw has now made the difficult decision to part with the first International honour of his pro career.

When auctioning his strap on eBay, Clark even offered to sign the belt and make personal delivery depending on the preference of the successful bidder.

“I am selling my official IBF European Super Featherweight Belt that I won in February,” said Clark.

“I have with it an option of it to be signed or not its totally up to the buyer. It’s on an auction with no reserve due to my next fight not happening as my opponent has pulled out injured so I have no money to buy my son Christmas (presents).

“These official belts go for a good bit of money so good luck with all and grab yourself a bargain.

He added: “I may deliver the belt personally to make sure it will get to the winning bidder safely.” 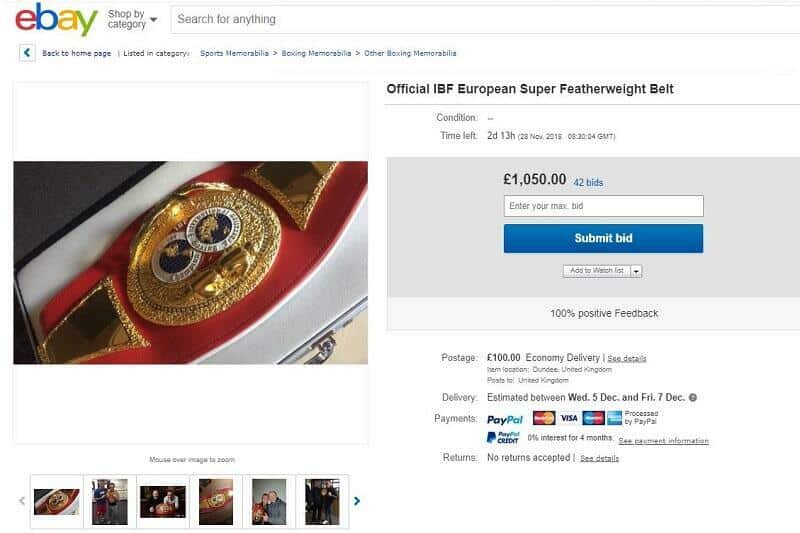 Following the cancellation of a scheduled fight in Aberdeen over the weekend, Clark took to social media to reveal his sadness.

“I am absolutely gutted. I have been on a rollercoaster ride these past few days,” he wrote.

“Again, my fight is off tomorrow and am honestly so sorry. It’s a very difficult sport at times, I sometimes actually can’t believe it’s real.

“I am staying positive though and I will embrace things and get back into the gym on Monday. Keeping myself ticking over that fight won’t be too far away.

“I love you all and appreciate the support and messages. (Also) just in general being there on the Team Clark Journey.”

If you’d like to bid of Ronnie Clark’s belt, the bid has reached over £1000 and ends on Tuesday.