Promoter Eddie Hearn wants talks between Anthony Joshua and Deontay Wilder to open up immediately after next weekend’s fight.

With time ticking on Joshua’s April 13 Wembley Stadium date, Hearn is keen to secure an agreement before Christmas Eve.

“If Fury wins and the rematch clause kicks in, we know we’ve got to move on ourselves, but my instruction is ‘Make that fight’,” Hearn told Sky Sports.

“They haven’t really wanted to speak to me before it. Now when the fight’s over, if Wilder wins, we’ll be on him on Sunday. Saying any chance now? Can we meet now? If they say no again, I don’t know what else we can do.

“If they are true to their word. On December 2, if they beat Tyson Fury, we will immediately start negotiations. We’ll see where we get to.

“April 13 is easy, and it’s a two-fight deal this time, the offer that we’ve made. One in America, one in the UK, we cannot say fairer than that.

“We’ve got to do our best to try and make it happen. We’ll be doing that straight after the fight. We’ve been trying to do it for the last two months, but no, wait, wait, wait.

“We’ll wait and then we’ll have a go on December 2. We’ve probably got three weeks (December 23) to make the fight. It’s enough time, if everyone is sensible. But who knows whether they really want it deep down,” he added. 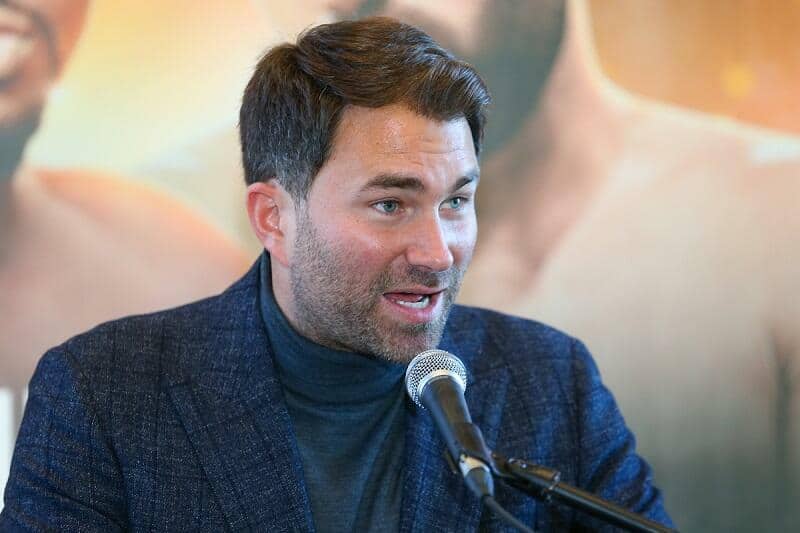 It’s a huge turnaround by Hearn (pictured above by Ed Mulholland), who was intent on offering Wilder just a $15m flat fee to face Joshua the first time around.

There was also no rematch clause in the contract if Wilder lost or there was a draw, which was a dealbreaker for ‘The Bronze Bomber’.


Everything changed once Wilder secured a fight with Tyson Fury. It fully proved he was completely serious in his bid to fully unify the division.

Defeating Fury will arguably make the 40-0 puncher the number one in the division and give him far more power once negotiations begin.

A 50-50 deal is highly possible, with proceeds from a PPV clash on Showtime and a DAZN fight in the UK potentially massive.

Joshua’s deal with DAZN could prove to be a sticking point in those future talks, though. As sharing TV rights would not work on separate formats that don’t offer a paid format.

Hopefully, negotiations will go smoothly and fans get the fight double they want in 2019.

Fury, on the other hand, will have plans to obliterate any Joshua v Wilder attempts and take the WBC title for himself.