Singh (10-0, 7 KOs), who has fought all but one of his professional bouts in India and England, will make his debut under the Top Rank banner in early 2019.

“Top Rank is very excited to enter into a contract with Vijender,” Arum said. “We intend to make him a big star in the United States and look forward to him participating in major events in India, where he is already a major superstar.”

“I am really excited to be on board with Bob Arum and Top Rank,” Singh said. “I’ve always wanted to work with someone who is the best in the business.

“I know Top Rank has been the driving force behind boxing’s biggest superstars, including Oscar De La Hoya, Floyd Mayweather, and Miguel Cotto.

“I’m eagerly waiting a date for my U.S. debut to take on the world and keep the Indian flag on the world boxing map fluttering high.

“I also want to thank Mr. Neerav Tomar and IOS Boxing Promotions for helping get me to this point of my professional career, and I look forward to working with Top Rank.”

“We at IOS are thrilled to be signing with the top boxing promoter in the world today, Mr. Bob Arum,” said Tomar, CEO of IOS Boxing Promotions. “There was only one choice when we decided to go with a promoter in United States, and Bob has done so much for professional boxers over the years and has been instrumental in building the careers of so many of the best boxers in the world today. We are honored to be promoted by him, and we look forward to a great future and shaping Vijender as a force to be reckoned with in the world of professional boxing.”

Singh, 33, turned pro in 2015 following an extensive amateur career that made him a mainstream celebrity in India, which included stints in Bollywood films and on the popular Indian dance reality show, “Nach Baliye.” But it was Singh’s in-the-ring accomplishments that set him apart. As an 18-year-old, he represented his homeland as a light welterweight at the 2004 Olympics in Athens. Four years later, at the Beijing Olympics and fighting as a middleweight, Singh captured a bronze medal to become India’s first Olympic boxing medalist. During the 2008 Olympics, he defeated Badou Jack, a current light heavyweight contender, and former two-weight world champion.

Singh went on to capture bronze at the 2009 World Championships (where he defeated current top middleweight contender Sergiy Derevyanchenko), gold at the 2010 Asian Games, and qualified for the 2012 Olympics. 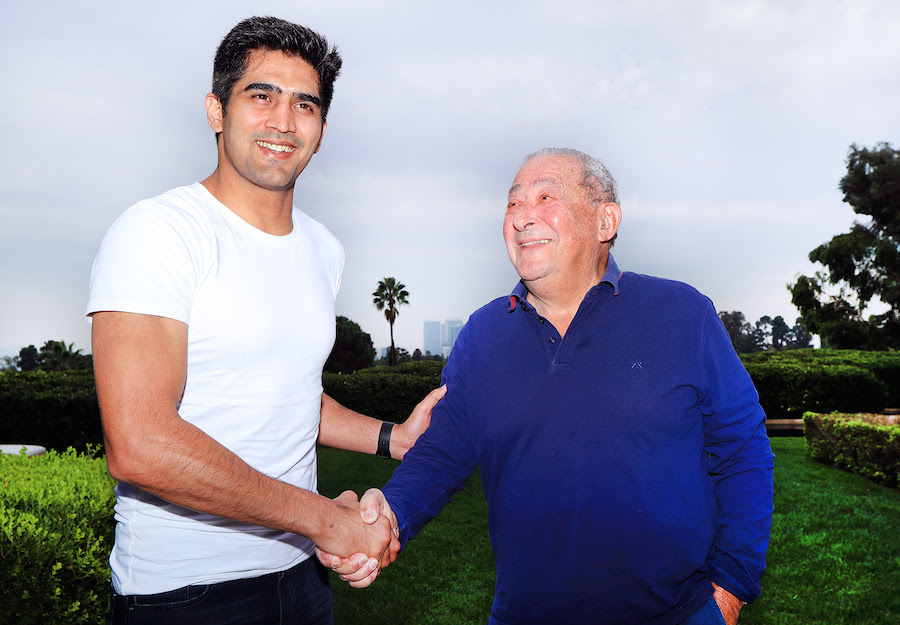