Papot, 27, who is also currently rated #7 Middleweight in the World (WBA) began boxing at the age of 5 in his hometown of Saint Nazaire, France, where he still currently resides.

With an impressive amateur pedigree, Papot has fought over 100 amateur bouts, earning the titles of two-time junior French champion, two-time vice champion and senior champion of France. Papot fought a total of thirty bouts with the French national team, reaching the quarter-finals of the European Championship.

In March of 2017, Papot took on undefeated Belarus southpaw, DZIMITRY ATROKHAU (then 15-0 5KO’S), where he earned the WBA Continental Middleweight Title by a dominating unanimous decision victory, with scores of 116-112 and 115-113 (2X). In his next bout, Papot took on co-Frenchman BARTHELEMY LEFEBVRE (then 16-8-1 4KO’s), for the France Super Welterweight Title.

Papot dismantled Lefebvre over the 10-round bout, winning another unanimous decision with scores of 99-91 and 98-92 (2X). Papot has successfully defended his title two times since being crowned Champion.

PAPOT has this to say about signing with Star Boxing, “Today I have global ambitions and that is why I need a strong team to accompany me to world titles and I trust my team and promoter Star Boxing to accomplish these goals. ” 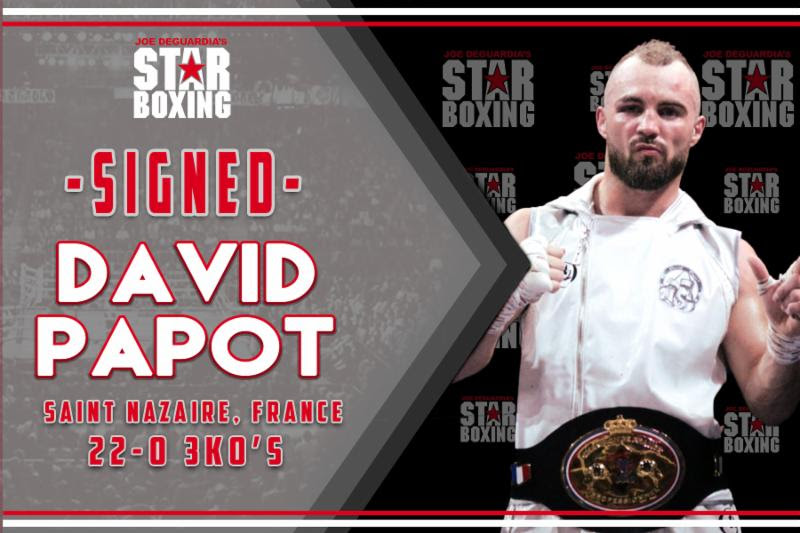 Promotor JOE DEGUARDIA said this about the signing of Papot, “We are excited to have signed David Papot, who has reached the pinnacle of boxing in France and now, together with Star Boxing, we believe David will have every opportunity to reach his goal of becoming a world champion.”

Star Boxing anticipates announcing David Papot’s next bout in the near future.