Home » What a difference in a year for muscle-busting, ab-boasting Tyson Fury

What a difference in a year for muscle-busting, ab-boasting Tyson Fury

Tyson Fury posted his latest photo update this week just over two weeks out from his world title shot.

On December 1, Fury attempts to claim the only championship to elude him in his career.

Fury faces WBC ruler Deontay Wilder in Los Angeles and released his newest picture exactly one year on from a previously memorable image.

Weeks after deciding to shed a ton of weight, Fury paid a visit to friend Ricky Hatton’s gym in November 2017. Fury released a photo of himself posing with Hatton having already shed a lot of weight.

Even so, Fury’s stomach hanging over his trousers proved there was still plenty left to do ahead of a 2018 comeback.

Fast forward a year, two victories and a renewed love for the sport and Fury is in truly remarkable shape.

Boasting bulging biceps and a six-pack any heavyweight would be envious of, Fury is in a great place. Both mentally and physically. 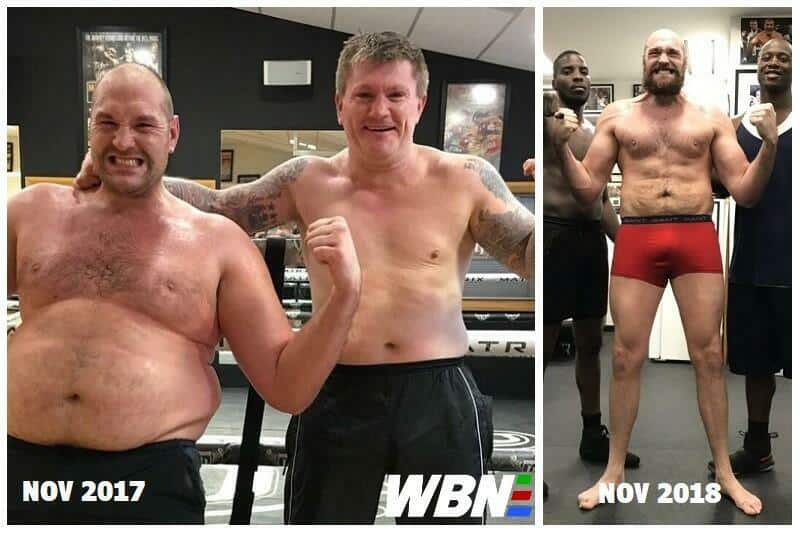 Training in Big Bear, Fury has been locked away with coach Ben Davison and surrounded by plenty of familiar faces.

Long-time friend Isaac Lowe, as always, is by his side. Whilst Joe Joyce has been preparing for a spot on the undercard at the gym owned by new mentor Abel Sanchez.

Add to that Lawrence Okolie’s presence. Plus Brian Phillips, Aaron McKenna and others during trips to the Wild Card.

The 30 year-old has been greeted with plenty of motivation, although battling one of the most dangerous fighters on the planet is already incentive enough for Fury.

In all, Fury looks in the best condition of his life. He knows there will be no excuses made or given if he loses to Wilder next month.

Truth is though, Fury is a winner whatever happens and is full proof anything is possible if you put your heart and soul into it.

Could you bet against Fury scaling a career-lowest 245 pounds at the Staples Center, certainly not?

Which then means Fury has lost close to 150 pounds in his quest to regain a place among the elite.