“I feel happy. I fought against a great warrior,” said Jesus Soto Karass. “I always say that whether it’s a win, a loss or a draw, the fans always win when they see one of my fights. I will speak with my team to see if this will be my last bout.”

“I want to thank God for giving me the opportunity to be in the ring with this great warrior,” said Neeco Macias. “I want to thank all of the fans for coming out tonight. We do this for you!”

In the co-main event, Manny “Chato” Robles III (17-0, 8 KOs) of Paramount, California defended his NABF Featherweight Title against Jose Gonzalez (23-7, 13 KOs) of Guadalajara, Mexico in an intense battle that Robles won via split decision. Two judges scored the fight 97-93 and 96-94 for Robles, while on scores the fight 94-96 for Gonzalez.

“I could have done better tonight,” said Manny Robles III. “He was very awkward and hard to hit. I don’t agree with the decision. I felt I won by unanimous decision, but I’m happy we got the win.”

“It was tough fight and I could have done better,” said Emilio Sanchez. “When he came at me at the beginning of the fight, I decided to keep my composure and stick to the game plan. 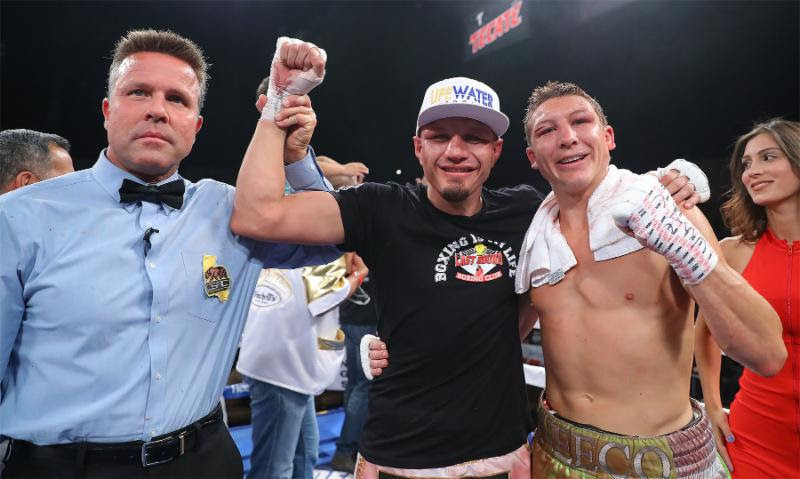 “This was my first fight in 15 months,” said D’Mitrius Ballard. “I was off due to some outside issues, but I’m back. I was shaking off some ring rust, and after a layoff like that, I want to come back as soon as possible.”

Aaron “Silencer” McKenna (6-0, 4 KOs) of Monaghan, Ireland stopped Abel Reyes (4-2, 4 KOs) of Tamaulipas, Mexico in a six-round welterweight fight. The fight was stopped at 2:27 of the second round.

“I took my time in there because I knew this was a six-round fight,” said Aaron McKenna. “I’ve been working on my body shots. I got him clean and dropped him to get the win.”

Jordan White (5-1, 4 KOs) of Washington, D.C. defeated Cristian Renteria (7-7, 6 KOs) of Tijuana, Mexico via KO in the first round with a time of 3:00 of a featherweight battle originally scheduled for four rounds.

“I felt like a dog. I felt great,” said Jordan White. “I loved every aspect of this event. I like the body shots, but I can do a little bit of everything. I’m looking forward to coming back.”

Sanjar Tursunov (1-0, 1 KO) of Tashkent, Uzbekistan stopped Miguel Cubos (11-20, 8 KOs) of San Luis Potosi, Mexico in the second round via TKO with a time of 1:26 in a cruiserweight fight originally scheduled for four rounds.

“I’m very happy with my performance,” said Snajar Tursunov. “Thank you to Golden Boy Promotions for this amazing opportunity.”