Star Boxing’s CLETUS “THE HEBREW HAMMER” SELDIN (Long Island, NY 21-1 17KOs) will be making his much anticipated return to the ring on November 16th against NELSON LARA (Nicaragua 17-10 9KOs) live on ESPN+ at the Chesapeake Energy Arena in Oklahoma City, Oklahoma.

New York’s hard-hitting warrior has his sights set on bringing his East Coast power out West to give the people of Oklahoma an unforgettable night of action.

“The Hebrew Hammer” has garnered a significant reputation in the boxing world for his devastating knockout power. With a knockout percentage of 74%, very few have been able to go toe-to-toe with Seldin and withstand his strength.

Seldin’s violent punching power was evident in his fight against Mexican heavy-hitter, Roberto Ortiz on November 11th of last year at the Nassau Coliseum. Televised on HBO, the New York native put on a performance for the ages, relentlessly landing heavy shots that put Ortiz on the canvas multiple times.

Seldin would go on to secure the win in the third round after the fight was stopped by the referee, giving him the TKO victory.

The impressive performance was the first of back to back HBO fights that saw Cletus Seldin become one of only three fighters in boxing history to appear on the network in consecutive months.

That accomplishment has Seldin forever joining only hall of fame world champions Mike Tyson and Roy Jones Jr. with such distinction. Seldin didn’t fare so well in the second HBO fight, losing a decision to Yves Ulysse Jr, and as result of an elbow injury suffered in that fight, had to have Tommy John surgery which has led to his 10 month layoff. 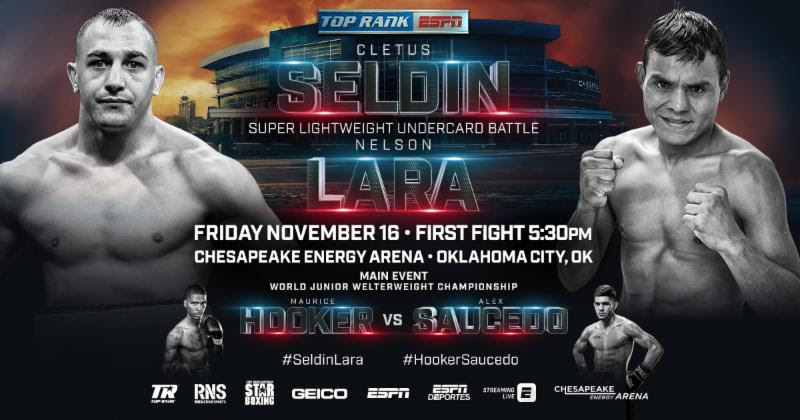 The Hebrew Hammer’s passion for the sweet science has seen him fight through the surgery an rehabilitation and the Hammer promises that he will be in the best shape of his career. Seldin is hungry to get back to the top world ranking he once held.

Seldin will have to do it against Nicaraguan veteran, Nelson Lara. As boxing fans know, Lara is never an easy fight. He is a crafty veteran with a bag of tricks that makes it difficult for fighters to land flush shots. The Nicaraguan-born fighter promises he will do whatever he can to make it a tough night for Seldin and has stated Seldin “picked the wrong guy to make a comeback against”.