The show will be headlined by undefeated Welterweight sensation Jaron “Boots” Ennis and will be nationally televised from the 2300 Arena in Philadelphia, PA.

Jones, who has been a ring announcer in popular places like DC, New York City, Philadelphia, and China, has had to face some ugly systematic snubs. Wildly popular in DC where he has been the only ring announcer for three decades and currently considered the most prominent African-American ring announcer in the history of boxing, Jones has been relegated to undercard ring announcer or completely cut out of nationally televised shows.

The reasons that have been given for Jones’ lack of inclusion range from what Jones has called “the sublime to the ridiculous.” Jones has been told he doesn’t SHOW UP WELL on tv to which a Promoter countered “that’s funny, the FIGHTERS look just like Jones and seem to show up pretty good.” Another time, a network told a Promoter he couldn’t use Jones because “Jones has a …um..loquacious condition.” The Promoter responded, “I sure hope he can get some help for it ‘cuz he’s a damn good ring announcer.”

Jones is a master’s degree social worker and has been with DC Government for thirty-six (36) years. He was recently promoted to supervisor for the city to address missing and runaway youth, and he has received Mayoral Proclamations for his work with youth in MD, DC, and NY. Jones has also authored an autobiography entitled “Its More Than A Notion” which tells of overcoming great adversities by having even greater character and faith.

The Foreword of the book was written by Jones’ mentor and one of the most iconic ring announcers in the history of boxing, Michael Buffer. A script is in development for a documentary and a movie, but Jones’ thirty (30) year boxing journey is a testament and proof the book is real and the mindset works.

Despite the criticisms and backhanded dealings, Jones has persevered and continued to perfect his craft. Jones finds strength and pays homage to African-American ring announcers Joe Bostic and Jim Ingram. Bostic served as a ring announcer in the 1940’s. After announcing for twenty-seven years, Bostic was given an opportunity to announce at MSG. Soon after, Bostic walked away from the profession, because he just wanted to break the barrier. 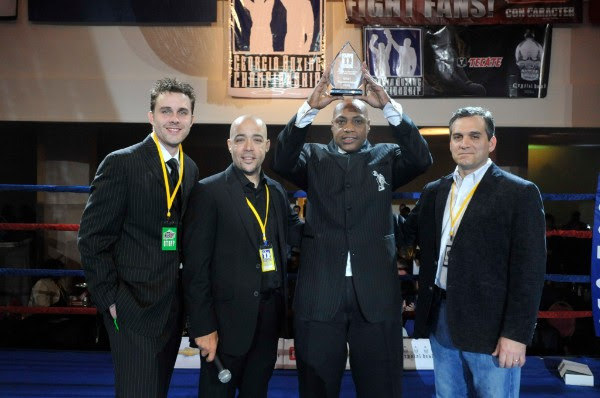 Ingram, who was from Detroit and had very dark skin, could not get a televised job in the 60’s and 70’s. The late Manny Steward, who was a trainer at the Kronk gym in Detroit made famous by Tommy Hearns, said, “while Ingram officially died of a cardiac condition, he really died of a broken heart because of the discrimination.”

Jones has pictured himself in this position for over thirty (30) years. Jones cherishes the moment and is appreciative to Chris Middendorf of Victory Boxing Promotions for making good on a promise and helping him secure a ring announcer assignment on a nationally televised show. “I have been waiting for this for 30 years.

I thank GOD. Keeping the faith has helped me get to this point. I’m not nervous about it. I’m anxious because it is my time to shine and open doors for future announcers.”…Henry “Discombobulating” Jones.

And with that, I think the boxing world will be amazed and entertained when “Discombobulating” gets his moment to shine.