Two members of the Hard Hitting Promotions stable will fight for NBA title belts on the non-televised undercard of a ShoBox: The New Generation event on Friday, November 16 at the 2300 Arena in Philadelphia.

Those bouts will precede a ShoBox: The New Generation tripleheader live on SHOWTIME® (9:35 p.m. ET/PT) that will feature an all-Philly showdown between undefeated Jaron Ennis and veteran Raymond Serrano. In the televised co-feature, Hard Hitting Promotions’ Samuel Teah will face Kenneth Sims Jr. in a junior welterweight bout. Opening the telecast will be a super bantamweight matchup between Arnold Khegai and Jorge Diaz.

“The NBA belt is a great springboard title, and to have two of our young prospects fight for titles on this great card is terrific for them,” said Manny Rivera of Hard Hitting Promotions. “The NBA has a long history of champions which include Roy Jones and Hector Camacho, so we definitely think that this will be the first of many titles for Branden and Gadwin.”

Pizarro, of Philadelphia, has a record of 12-1 with six knockouts, and the 19-year-old keeps improving with each fight. Rodriguez (7-10-3, 2 KOs), of Allentown, Penn., is battle tested and has wins over two undefeated fighters, including world-ranked Avery Sparrow.

Rosa ,of Ocala, Fla., is 8-0 with seven knockouts. The unbeaten super featherweight will look to continue his knockout prowess as he fights the 113-fight veteran German Meraz, who has faced numerous top prospects and contenders. For Rosa, this fight will be a solid indicator of where the talented youngster stands as he climbs the 130-pound ladder. 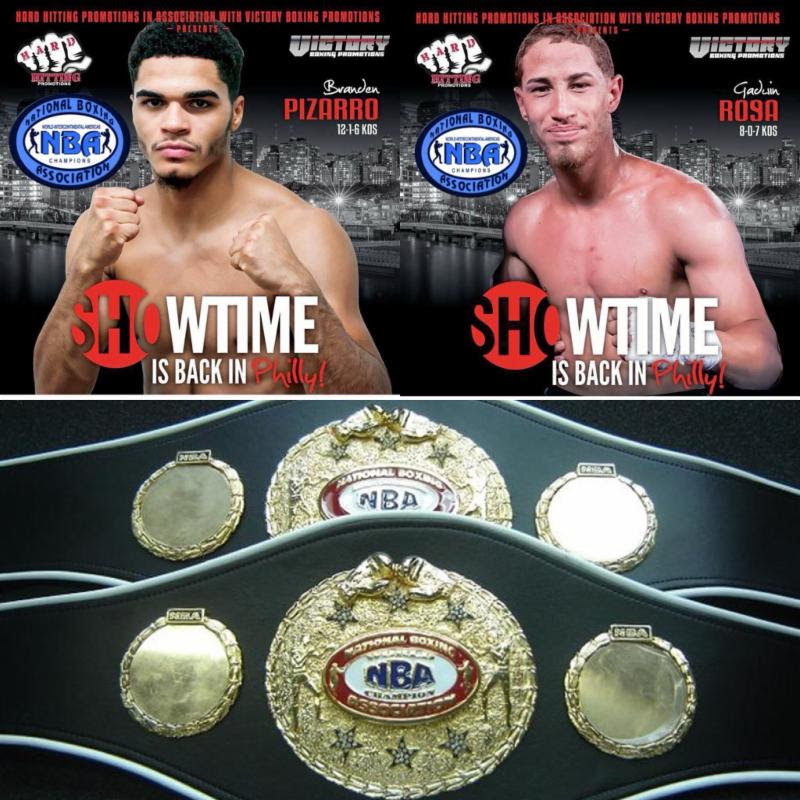 Also seeing action against opponents to be named will be super bantamweight Angel Pizarro, of Philadelphia, and light heavyweight David Stevens, of Reading, Penn., who will make his professional debut in a cruiserweight fight.

Tickets for the show, which is promoted by Victory Promotions in association with Hard Hitting Promotions, are priced $50, $75 and $125 and can be purchased at 2300arena.com and hardhittingpromotions.com.