The charismatic Marie-Eve Dicaire (13-0-0, 0 KOs) will have the chance to make her dream come true on December 1 at the Videotron Center in Quebec, when she fights for the International Boxing Federation (IBF) World light middleweight title against champion Chris Namus (24-4-0, 8 KOs), of Uruguay. Marie-Eve will fight in the first women’s world title bout in Quebec’s history.

The 31-year-old Namus, fighting out of South America, signed the contract this past Tuesday to defend her crown against Dicaire in the co-featured event on the card headlined by the World Boxing Council (WBC) and lineal light heavyweight world championship bout between Adonis Stevenson and challenger Oleksandr Gvozdyk, adding some spice to an already red-hot card.

Namus, nicknamed “El Bombon Asesino”, has been IBF champion since 2017, when she defeated Argentina’s Yamila Esther Reynoso for the vacant title. She has since defended her belt once, against her compatriot, Katia Alvarino.

“First of all,” Dicaire said, “I must say that I feel privileged to have the opportunity to box for the world championship for the first time here in Quebec. This fight represents years of effort, sacrifice, perseverance and to live that moment before those who supported me during this tumultuous journey is indescribable for me.

“My preparation for this fight is already well underway and I must admit that the signature of Namus has just added an additional motivation for the last steps of my camp. So, watch out! I cannot wait to be in the ring and touch this belt!”

“Marie-Eve is in a good position to be a star in the history of Canadian boxing. She will not have a second chance to leave a good first impression,” added GYM’s vice president of operations and recruitment, Bernard Barré.

The “Mandatory” event will be televised in the United States and Canada on pay-per-view via Indigo, Bell TV and Shaw TV. 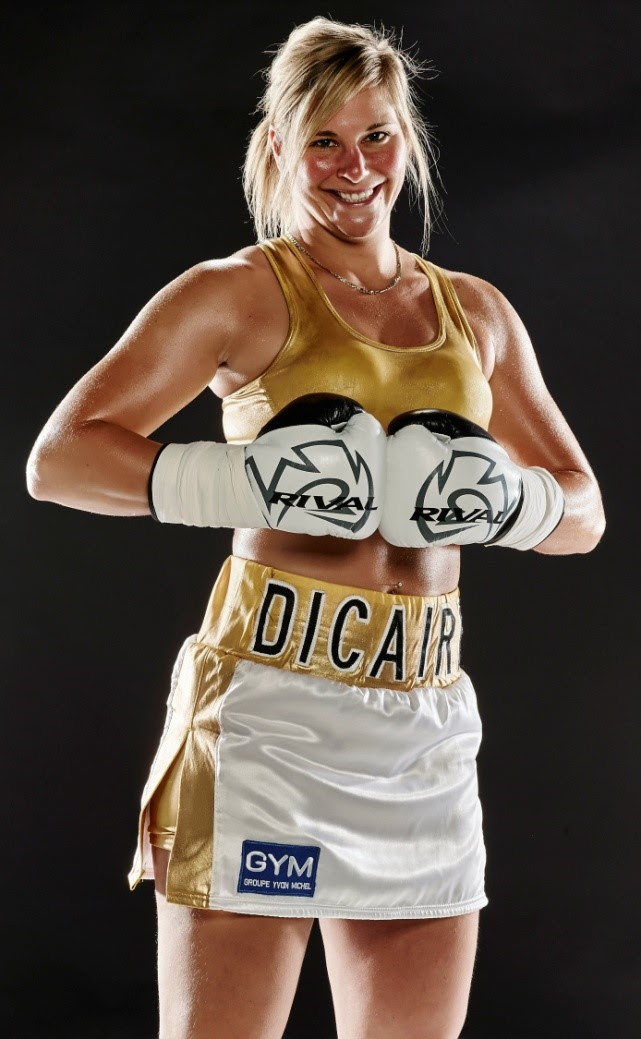 Marie-Eve Dicaire has been in the fighting sports since a very young age. At only 6 years old, karate captivated her. She obtained a black belt and won a Canadian Championship before even being 11 year-old.

At 18 years old, Marie-Eve became karate world champion for a first time. She would win that title four other times.

She also gained a spot on the NASKA American circuit with the Amerikick team.
A 5th degree black belt and owner of a dojo (Karaté Sunfuki), Dicaire made a switch to kickboxing and had two fights (a win and a draw) before starting boxing.

On the amateur boxing scene, she fought more than 50 times in less than four years.
Her best year was 2013, when she won the Quebec Championship, Canadian Championship and the Ringside World Championship, plus a win over the American champion in a Canada versus United States meeting.

Boxe Québec also named her 2013 Athlete of the Year.

The fighter from Saint-Eustache, Quebec, made her pro debut November 20, 2015, in Sorel-Tracy. She defeated Christina Barry, from Manitoba, by unanimous decision.
January 21 at the Montreal Casino, Dicaire beat Christina Barry for a second time to keep her undefeated record.

May 24 at the Montreal Casino, Dicaire faced a rival ranked 16th in the world by the WBC, American Ashleigh Curry. With an energetic body attack, she won a unanimous decision.

On October 20th, it was Mexican warrior Karla Zamora’s turn to taste Dicaire’s medicine, and then on December 10, former NABF champion Paty Ramirez, of Mexico, was also defeated.

On February 9th at the Cabaret of the Casino de Montréal, Marie-Eve fought for the first time in the final bout of a professional boxing card. It was also a first women’s final for GYM. The southpaw delivered a perfect performance for his first eight-round confrontation by winning a unanimous decision over aggressive American Lisa Noel Garland.

In her most recent performance on June 15, she completely dominated the tough regional champion of Tijuana Alejandra Ayala.

In the first 10 rounds fight of her career, October 25, 2017 at the Lac Leamy Casino, Dicaire won a spectacular battle against the aggressive champion of Argentina Yamila Esther Reynoso, winning by unanimous decision.

After a win in a rematch with Ramirez, the southpaw faced former IBF World Champion Marisa Gabriela Nunez on February 15 at the Cabaret du Casino de Montréal. Thanks to a win by majority decision in 10 rounds, she captured her first professional belt, the NABF light middleweight title.

Accustomed to performing at the highest summit of the disciplines, in which she has evolved, Dicaire is aiming for nothing less than a world championship belt. She is currently ranked #1 by the WBA, #2 by the IBF and #2 by the WBC.