Teofimo Lopez is determined to take over the lightweight division. Italian heavyweight and former amateur standout Guido Vianello, who recently signed a multi-year professional contract with Top Rank, is hoping to make a statement in his scheduled six-round pro debut against Luke Lyons (5-1-1, 2 KOs).

Lopez (10-0, 8 KOs), who hails from Brooklyn, will battle Mason Menard (34-3, 24 KOs) for the vacant NABF lightweight title in a 10-rounder on the undercard of the Vasiliy Lomachenko-Jose Pedraza lightweight world title unification bout, Dec. 8 at the Hulu Theater at Madison Square Garden.

Vianello-Lyons and the rest of the undercard will stream live at 6 p.m. ET on ESPN+ — the new multi-sport, direct-to-consumer subscription streaming service from The Walt Disney Company’s Direct-to-Consumer & International segment in conjunction with ESPN. 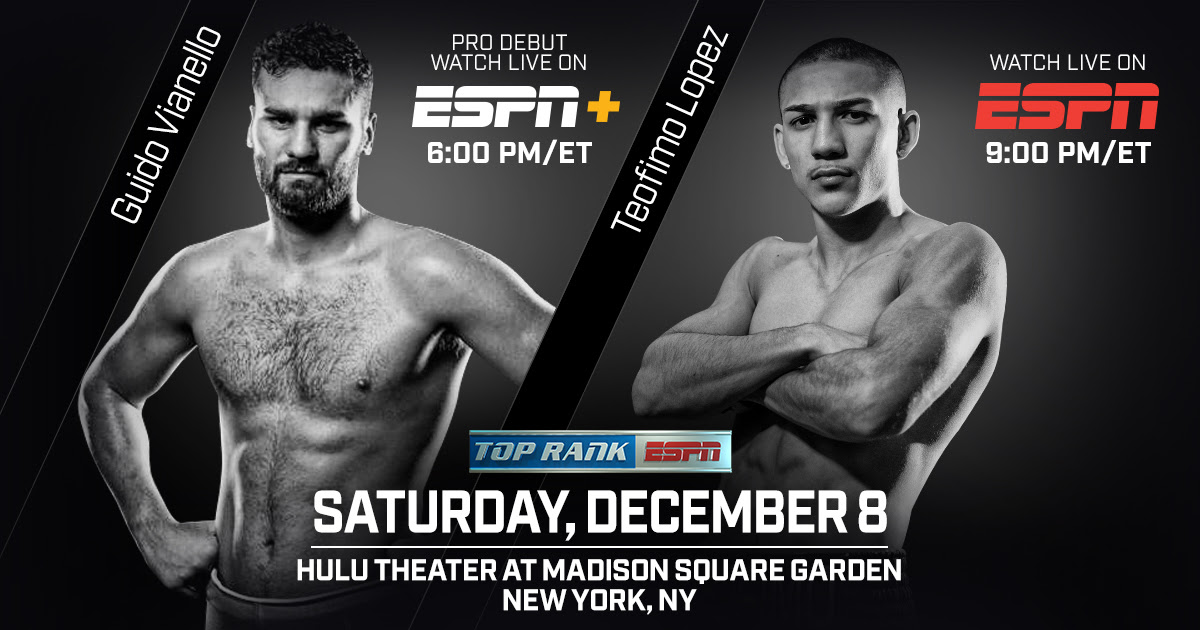 “The ‘Takeover’ is coming back to the Mecca of Boxing,” Lopez said. “I am going to steal the show once again. It’s my night. It’s time to finish 2018 with a bang. Expect a big celebration after I stop Mason Menard. I was born in Brooklyn, so you know I have to represent my hometown.”

“I’m looking forward to fighting Teofimo on Dec. 8. It’s been my dream to fight at Madison Square Garden, and the fact that I am being given a chance to perform on Lomachenko’s undercard live on ESPN is incredible,” Menard said. “I can assure everyone that I will be 100 percent ready, and my performance will lead me to a world title shot.”

“I’m so happy to be joining Top Rank and to debut at Madison Square Garden on a Lomachenko undercard, which is a dream come true for me,” Vianello said. “I will do my country proud. I promise I will bring excitement and knockouts to the heavyweight division and ultimately fulfill my destiny of becoming the heavyweight champion of the world.”

The 21-year-old Lopez emerged in 2018 with a string of dominating wins and attention-grabbing post-win dances. In May, on the Lomachenko-Jorge Linares undercard at Madison Square Garden, he knocked out Vitor Jones Freitas in the opening round and went viral after performing the “Take The L” dance from the Fortnite video game. He last fought July 14 in New Orleans, knocking out the durable William Silva in six rounds despite suffering a broken right hand earlier in the fight. He underwent surgery the following week. Fully recovered, Lopez hopes to make headlines once again. Menard, an 11-year pro with a vicious right hand, is coming off a decision victory against Ronald Rivas on Oct. 13 in Gary, Ind.

Vianello, a 6-foot-6 power puncher from Rome, went 87-15 in the amateur ranks and fell short in the Round of 16 at the 2016 Olympics. One of the most popular boxers to emerge from the Italian amateur system in quite some time, Vianello is training in Big Bear Lake, Calif., under the guidance of Abel Sanchez. He’s already sparred the likes of lineal heavyweight champion Tyson Fury as he prepares his transition to the paid ranks.

In addition to Vianello-Lyons, the ESPN+ stream will include:

Welterweight punching sensation Alexander Besputin (11-0, 9 KOs) will make the first defense of his USBA title against Juan Carlos Abreu (21-4-1, 19 KOs) in a 10-rounder. Besputin knocked out Alan Sanchez on Sept. 14 to win the belt. Abreu is coming off a competitive unanimous decision defeat to Egidijus Kavaliauskas, which headlined an ESPN broadcast on July 7 in Fresno, Calif.

Josue “The Prodigy” Vargas (11-1, 7 KOs), from The Bronx, N.Y., will make his Top Rank debut against John Renteria (16-5-1, 12 KOs) in an eight-round super lightweight fight. Vargas has won five straight since his lone defeat, which came via disqualification against Samuel Santana.

Use the hashtag #LomaPedraza to join the conversation on social media. To subscribe to ESPN+, visit www.plus.espn.com.