Christian Carto wants titles in 2019 ahead of Nov 9 bout

Millions of travelers drive on Interstate-95 each day. In each direction there are many billboards that are visible for miles. For the better part of the last month, two billboards in particular feature one of the hottest prospects in boxing in undefeated bantamweight Christian Carto.

Carto, who has been featured multiple times by SugarHouse Casino as the 21 year-old has developed a relationship with the casino as he has packed the fight venue on seven previous occasions.

“It’s really cool to see me up on these big billboards,” said Carto. “I didin’t know they were going up, bit it is very exciting to see it.”

Those massive billboards can only enhance Carto’s already huge fanbase.

On Friday night, November 9th, Carto will make his eighth appearance at SugarHouse Casino when he takes on 37 fight-veteran Antonio Rodriguez in the six-round main event of a seven bout card promoted by King’s Promotions.

Carto has signature victories over Alonso Melendez (14-1) and James Smith (12-1). Carto is coming off a eight-round unanimous decision over Javier Gallo on August 18th in Atlantic City, New Jersey. 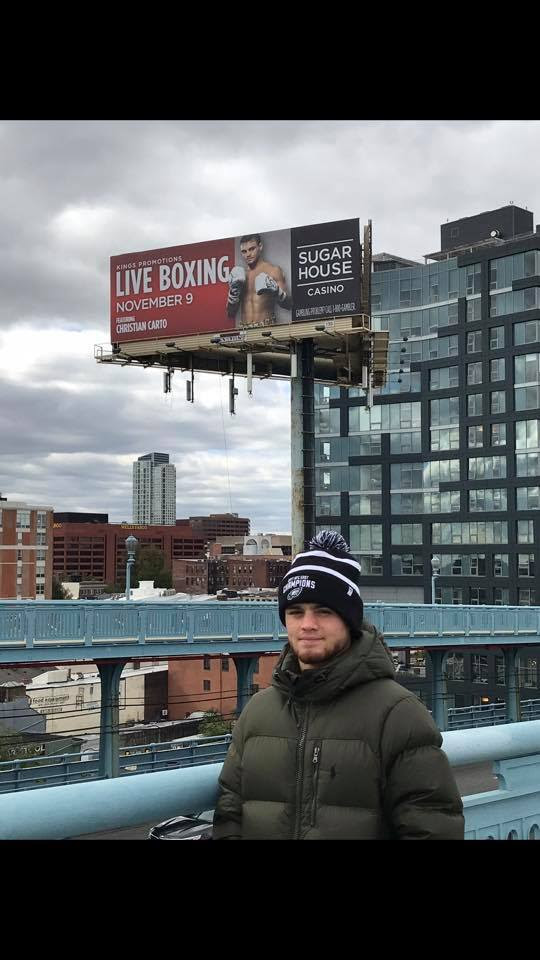 “I don’t know too much about him,” continued Carto I know his is a Mexican fighter who likes to come forward. We share a common opponent in Alonso Melendez. I have seen that he is tough.”

This will be the 4th outing of 2018 for Carto, and with a win he will raise his mark to 2019, but the 21 year-old is continuing his learning process as he heads into the the new year.

“I feel that I started off well in 2018. I always want to do better, and I am own biggest critic. I feel that I should have done better in my last two fights. This training camp, which is my 2nd camp with Billy Briscoe as my head trainer, I learned a lot, so I know I will do better.”

With Brisoce manning the corner, Carto sees himself getting better with each fight in 2019.

“I can definitely see myself fighting for a regional title in 2019, but I am still earning, so there is no rush. With being with Billy, I would like to go out to a training camp with one of the champions to help them get ready for a big, which will help me even more.”

“I just want to thank Billy as well as my brother Frankie who has helped me a lot with the training. My father who helps with all the tickets and ticket requests. I also had some great sparring with a Romuel Cruz. I am ready for a great fight.

In a rematch of a draw that took place on August 10th at SugarHouse Casino, Ricardo Garcia (14-3-1, 9 KOs) of Santo Domingo, DR fights Tyrone Crawley (7-1-1) of Philadelphia in a eight-round junior welterweight fight.

Also in a six-round bout, Frank Trader (10-2-1, 2 KOs) of Philadelphia will fight 37 fight veteran Pablo Capul of San Diego in a lightweight bout.

Pro debuters will square off as Maurice Burke of Philadelphia dukes it out with Brandon Bey of Bronx, NY in a junior welterweight contest.

The weigh in will take place on Thursday, November 8th at 6 PM ET.