Alex Karassyuk, a representative of Oleksandr Usyk and K2 Promotions, has praised Eddie Hearn’s part in the resurgence of boxing.

Hearn has overseen a steady rise on the paychecks handed out to his fighters through Pay-Per-View regularity. Plus, has had a significant role in the further development of DAZN in the United States.

As Usyk and his team near their part in a massive event on UK sole against Tony Bellew on November 10, Karassyuk couldn’t help but give Hearn his props.

“First of all, I would like to give huge credit to Eddie and his partners Sky Sports for the job they have done in recent years, giving new life to British boxing and boxing in the whole World,” said Karassyuk.

“I hope our cooperation will not just be within one fight or two fights, but we will be able to bring some top-level events to Britain, Ukraine and the rest of the World.

“I would like to say some pleasant words to the true warrior, the lion heart that we respect so much, Tony Bellew. He proved many times that being an underdog does not mean being a loser.

“Of course, I will be supporting Usyk on November 10, but I want to wish Tony good luck.” 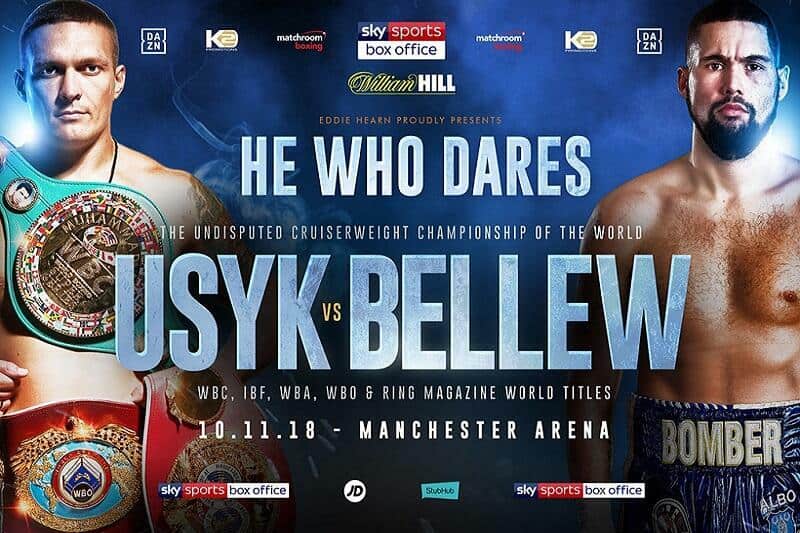 Karassyuk also sees the victor of next week’s clash cementing their place in boxing folklore.

“Usyk is just extraordinary, he’s one in a million. Together we have accomplished every boxers’ dream within just 15 fights.

“In five years we collected all of the belts in the division. Now we are in the native land of boxing (for Bellew).

“This matchup is something the World was waiting for, the winner will get all of these amazing belts and probably book a place in the boxing Hall of Fame. This is history in the making,” he added.

Whoever comes out on top will be the top dog at 200 pounds.

Usyk will be planning a fight with Anthony Joshua, whilst Bellew has promised to bow out at the summit.