‘The Bronze Bomber’ won over the Irish fans during his scouting trip to watch forthcoming opponent Tyson Fury defeat Francesco Pianeta at Windsor Park to set-up a massive Pay-Per-View battle in 2018.

Wilder spent hours with fans signing autographs and gave up plenty of his time, although an incident with Fury’s friend Billy Joe Saunders had threatened to overshadow the mission.

Spending downtime after the weigh-in grabbing a bite to eat at a local Nando’s, Wilder was approached by Saunders and immediately confronted him over some choice words stated to the UK media in the past.

Not taking too kindly to the impromptu greeting, Wilder asked Saunders about his comments and things soon turned ugly with the middleweight title holder launching a piece of marinated chicken at the American’s head.

With his entourage giving chase, Wilder called them back in order to cool the situation, and once everything subsided, publicly made peace with Saunders the next evening on fight night. 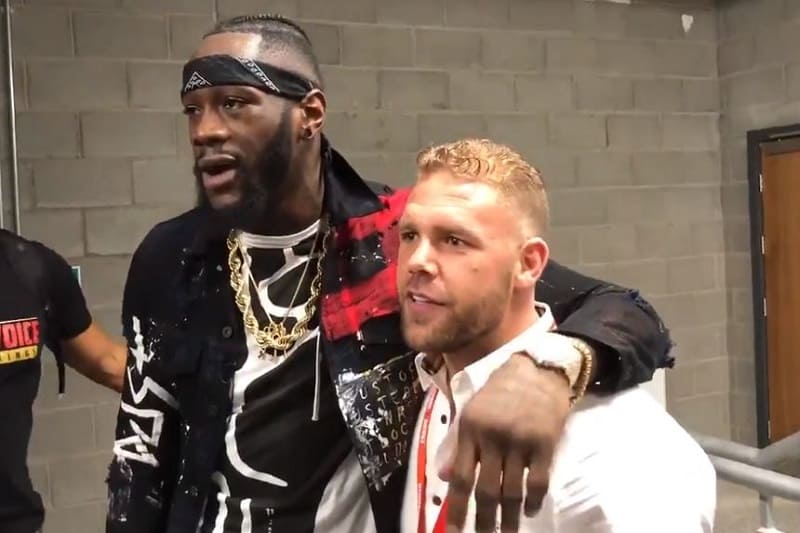 Giving his take on events having witnessed them from Stateside, Deas couldn’t help crack a joke or two.

“First of all, a Nando’s chicken is made to be consumed not thrown! Throwing such a tasty piece of chicken should be a crime – defamation of chicken character,” Deas exclusively joked to World Boxing News.

“Seriously though, I think Saunders had said some things a while back and it all came to a head with Deontay. But they are both among the best fighters in the world today so I’m glad that in the end it all got worked out and Nando’s got some great publicity.

“Maybe Deontay and Billy Joe ‘Colonel Saunders can open a restaurant together,” he added.

On how Wilder was taken in by the Belfast crowds, Deas says the 32 year-old proved his worth as a world ruler in the top division.

“Deontay is the real Champ and the People’s Champ too. He loves fans and they love him. He will never be the type to avoid people and he thrives off the positive energy they give him.

“I knew he would be well received and be a breath of fresh air to the masses. In Belfast, they are true boxing fans and recognize that Deontay was the one who tried to be the first heavyweight Champ to defend his title in Russia against Alexander Povetkin and Deontay was the first to insist on as dangerous a foe as Luis Ortiz.

“Deontay was also the one to offer $50 million to Anthony Joshua and now he is the one to go after the lineal heavyweight champ Tyson Fury.