The Real Deal Boxing and Shabazz Brotherz Boxing are proud to announce the debut of a new professional boxing series on Saturday, September 22nd at Bowie State University in Bowie, Maryland.

Headlining the card will be Bowie State University graduate and the Real Deal Boxing’s own Greg Outlaw (5-0, 2 KOs). 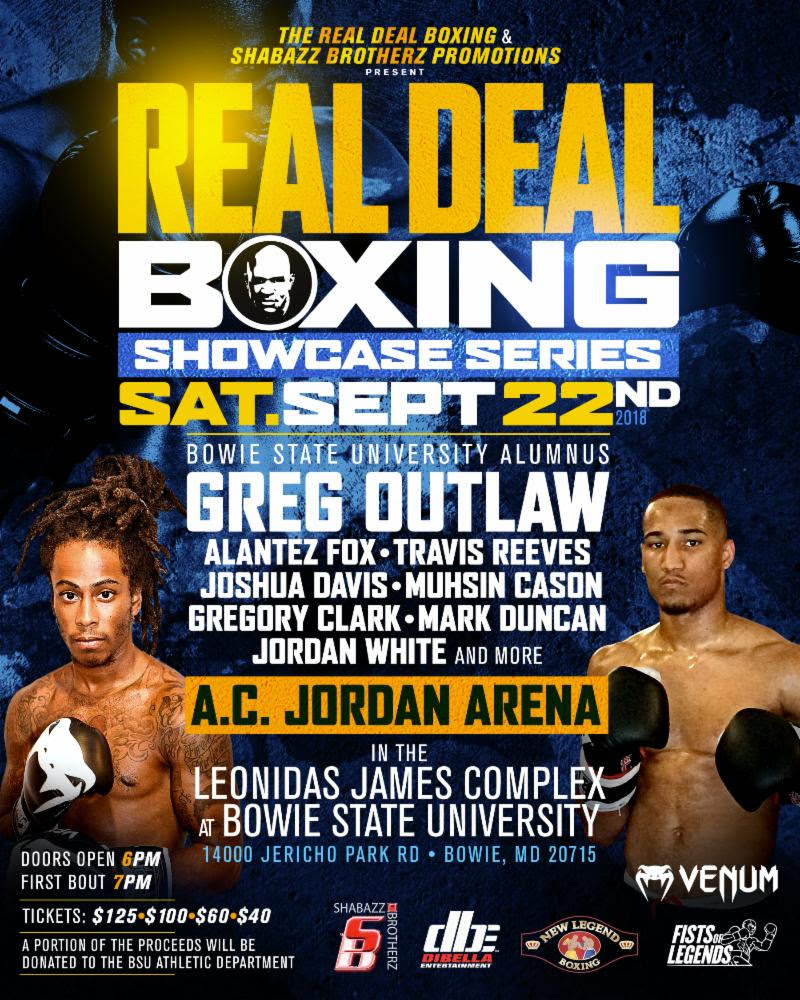 Outlaw, a 2016 graduate of Bowie State University with a Bachelor’s Degree in Sport Management, has put his business career on hold to follow his dreams in the sport of boxing. He is unbeaten in 5 professional bouts, including a sensational knockout over New Jersey’s rugged Dan Murray earlier this summer in Atlantic City.

The junior welterweight, who has a massive following in the Maryland region, is beyond excited to be headlining his first event at an arena on his college campus.

“I’m super excited to fight at my alma mater, Bowie State University.” says, Outlaw. “My experience there helped mold me into the man that I am today. It’s only right that I put on a show for my fellow Bulldogs and my surrounding community.”

In addition to Outlaw’s homecoming headlining bout, the card will feature a showcase of fighters from the region including…

USBO Light Heavyweight Champion, Travis Reeves (15-3-2, 7 KOs) who will be defending his title.

A member of the famed fighting Rahman family, Muhsin Cason (2-0) who will look to extend his perfect record in a 4 round contest.

Popular Washington, DC. featherweight, Jordan White (4-1, 3 KOs) who will return to the ring in a 4 round bout after a year long break.

Mark Duncan, who will make his highly anticipated pro debut in a 4 round middleweight contest.

Washington, DC based super middleweight Gregory Clark (3-2-1, 1 KO) who will appear on the card in 4 round action.

The pride of Landover, Maryland, Tyrek Irby (4-0, 2 KOs) who will put his undefeated record on the line in a 4 round lightweight bout.

Another anticipated pro debut when Maurice Winslow III enters the professional ranks in a 4 round contest.

The event also marks the start of a unique and exciting partnership between Bowie State University, The Real Deal Boxing and Shabazz Brotherz Boxing.

Students of Bowie State University’s sport management and communications departments will work firsthand with the promoters on producing the event, enabling the students to gain actual real life experience in their chosen fields.

“This event will put on display a total team effort as BSU students, in the majors of sport management and communications, who will work with veteran professionals to gain hands on knowledge of sports production, management and promotion. We look forward to an exciting evening of boxing action with spirited and talented competitors. We are Bowie State University and this is our moment racing to excellence.”

Outlaw, who is already overwhelmed with ticket requests for the big night, couldn’t agree more.

“The response has been incredible. I expect an electrifying and sold out crowd full of fans supporting me and I won’t disappointment them. There won’t be an empty seat in the house and it’s going to be a special night in the history of Bowie State University.”

As Kevin O’Sullivan, The Real Deal Boxing’s VP of Operations and Development explains, “We’re always looking to think outside the box when it comes to our events and the sport of boxing in general. We feel the event at Bowie State University could lead to a series of boxing events at college campuses across the United States where students can work firsthand on all aspects of the production of a sporting event that takes places on their campus. With Outlaw being a graduate of Bowie State University and having a large fan base on campus, as well as the vision of the school’s tremendous Athletic Department, we knew it was the right place to start what we believe will become a popular and innovative series.”

“I am truly honored to be working with Real Deal Boxing and bringing that same type of talent to the card at Bowie State University on September 22nd. We look forward to this being the start of great partnership and series.”