Advertisements
Home » EXCLUSIVE: Khan warns he won’t wait like with Mayweather, but Pacquiao at Wembley is massive

EXCLUSIVE: Khan warns he won’t wait like with Mayweather, but Pacquiao at Wembley is massive

Khan is pitted against the tough Colombian on September 8 in Birmingham, knowing a good performance could set up a clash with old training partner Manny Pacquiao.

The Bolton man and Pacquaio shared a stable under Freddie Roach back in the day and Khan is well aware of the significance a fight with his old friend holds.

In the past, Khan was given the run around by ex-pound for pound number one Floyd Mayweather, not once but twice, and the 31 year-old has vowed not to be messed about again.

“I won’t be wasting my time chasing opponents anymore as I think I wasted too much time waiting for Floyd Mayweather, for example, and even Pacquiao but I’m not really going to wait around.

“I’m just going to see what my promoter Eddie and Team Khan have to say and who they think I should fight because there’s no point me wasting any more time. I’m just going to be smart now and fight whoever comes up to keep myself busy.”

On whether initial contact was made after Pacquiao’s win over Lucas Matthysse in July, Khan said his crosshairs are firmly fixed on defeating Vargas first.

“There’s been no contact with Manny or his team yet, but even if there was, I’m focusing on Samuel Vargas,” he revealed.

“I’ve made a mistake before where I looked beyond an opponent and you end up getting caught or you end of losing, so I can’t afford to make any mistakes and I’m just going to be focusing on Samuel Vargas.

“Whatever happens after that, it takes me where it takes me, but my focus is on one guy.” 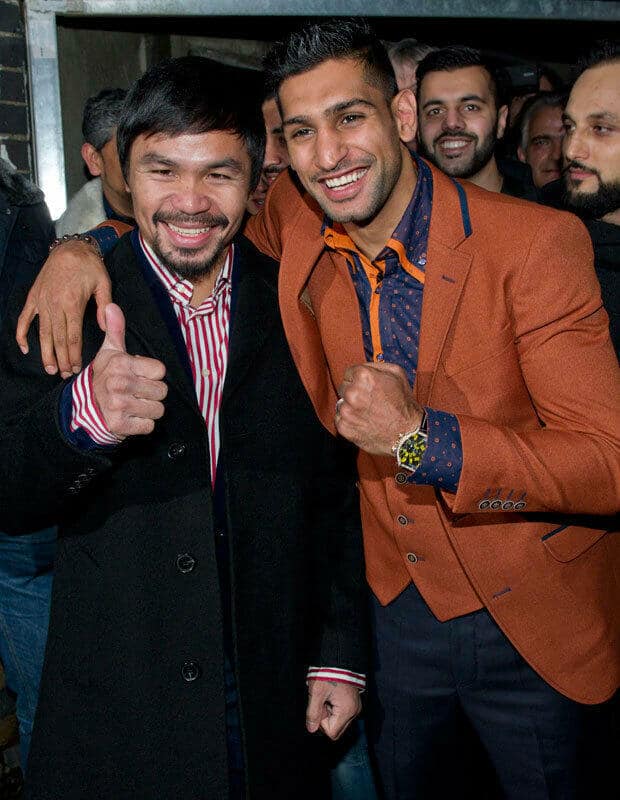 Friends: Pacquiao and Khan held serious talks in 2015 before Floyd Mayweather stepped in

With a renewed vigor and plan to stay busy under his new promotional banner at Matchroom, Khan is eyeing an enormous bout against a top name, potentially Pacquiao at the National Stadium.

“At the end of 2018 I want to fight again. The last time I fought three times in a year was a very long time ago, so let’s just hope I can stay injury free and we go straight back into training camp after this fight against Samuel Vargas on September 8th.

“I want a third fight this year, and as I said, I don’t want to be waiting around for anyone.

“Obviously it would be lovely to fight someone like Manny Pacquiao as he’s a legend in the sport and I’ve always wanted to fight him.

“I’ve always fancied my chances, so if it happens, it happens but there are also other names out there for me.

“A Pacquiao fight anywhere in the world would be massive. In the UK, I believe it could sell out Wembley but that’s up to my promoter Eddie Hearn to make sure we put a good card on.

“Manny Pacquiao versus myself it’s two big names in boxing and it’s a fight that people would want to see. It would be an explosive fight and obviously, Manny is a superstar in the sport.

“I’m sure the British fans want to see Manny Pacquiao, so I believe Wembley would be the ideal arena to stage a fight like that,” added the welterweight star.