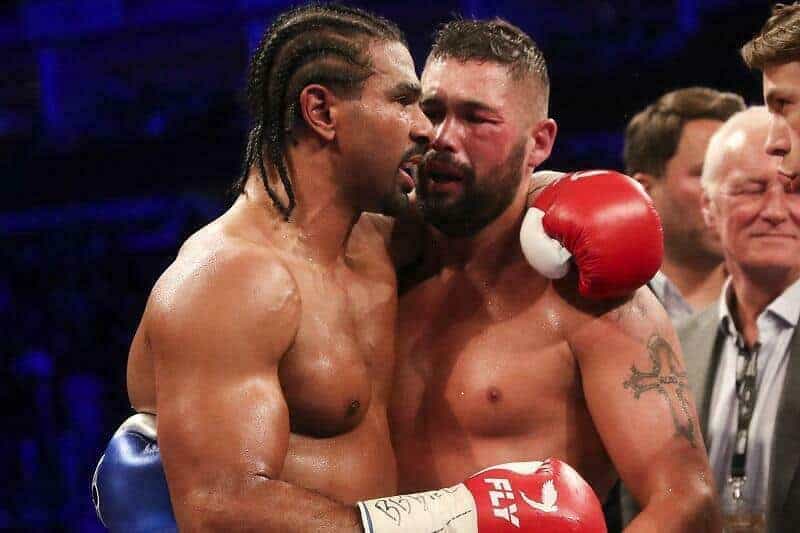 Tony Bellew will come face-to-face with David Haye on Saturday night as the pair prepare to be part of the Sky Sports Box Office team for Dillian Whyte v Joseph Parker.

The heavyweights enjoyed a fierce rivalry through two fights in 2017 and 2018, with Bellew coming out on top in both against a faded and aged Haye.

‘The Bomber’ said some derogatory things to Haye, which were also reciprocated by the Londoner, although Bellew hopes it’s all water under the bridge.

“I am looking forward to it,” Bellew told Sky Sports.

“He knows the amount of respect I have for him as a fighter and as an athlete. He has been the best in the game, he’s fantastic at what he does and to be honest, he is very knowledgeable on boxing.

“He can break down fights stylistically. He knows styles, what works, what doesn’t work and he has got a huge interest in the fight on Saturday night because Joe Joyce is his charge.

“I’d like to think David will be as magnanimous as I am going to be, but we’ll see. It’s buried now, it’s done, but you never know.

“We’ve played the game with each other over the last two years and as I say, I have always respected him and admired him as a fighter and someone who I looked up to.

“I always wanted to get to the level of David Haye, and eventually got there – and beat him twice,” he added.

READ: PICTURED: Heavier Dillian Whyte gets UP CLOSE and PERSONAL with Joseph Parker at tense weigh-in

Bellew and Haye will run the rule over Whyte v Parker, a battle which could see the winner gain a title shot in 2019.

Both were beaten by Anthony Joshua in the past but still hope to gain a second chance with victory at The O2 Arena.