Usyk nullified the threat of Murat Gassiev with a tremendous showing of skill to win the inaugural Muhammad Ali Trophy.

Using all his unbelievable talent, Usyk won every round in a brilliant display of punching for the duration.

Throwing an unprecedented amount of blows, Usyk took the fight 120-108 and 119-109 (twice) on the cards to be crowned the undisputed title holder and the first ever World Boxing Super Series winner.

Beginning the year at number 15 in the WBN P4P Top 50, Usyk defeated the number two and three in his weight class to prove his worth as the best around at 200 pounds.

A move to heavyweight could be on the cards for two-time Olympic gold medallist, who threw over 900 punches on his way to challenging Vasyl Lomachenko closely for the top boxer on the planet accolade.

Lomachenko’s superior run of world title fights, multi-divisional victories and calibre of opponent in his last win are the three main reasons Usyk failed to topple his compatriot, although a significant win at the highest weight class could change all that in the next twelve months. 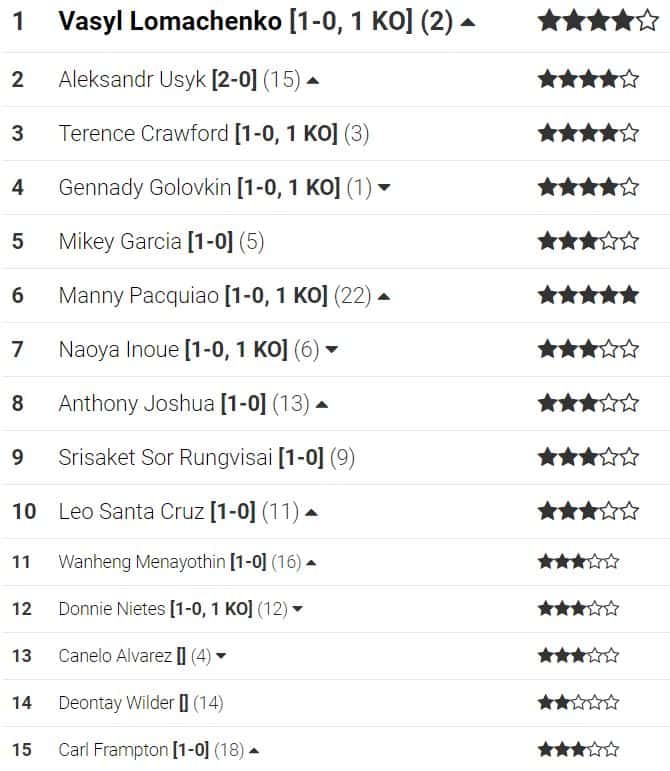 Terence Crawford drops back to number three, where he started in January 2018, whilst Gennady Golovkin has now moved down from one to four after suffering a frustrating year.

Mikey Garcia remains in fifth spot ahead of his unification fight with Robert Easter Jr. this summer.