‘Pacman’ returns to the super-elite for the first time since winning the WBO strap from Jessie Vargas back in November 2016.

The win over Vargas was enough to see Pacquiao become the P4P number one due to form and performances, although a controversial loss to Jeff Horn and a year out action means the Filipino Senator sits behind Vasyl Lomachenko, Gennady Golovkin, Terence Crawford and Mikey Garcia. 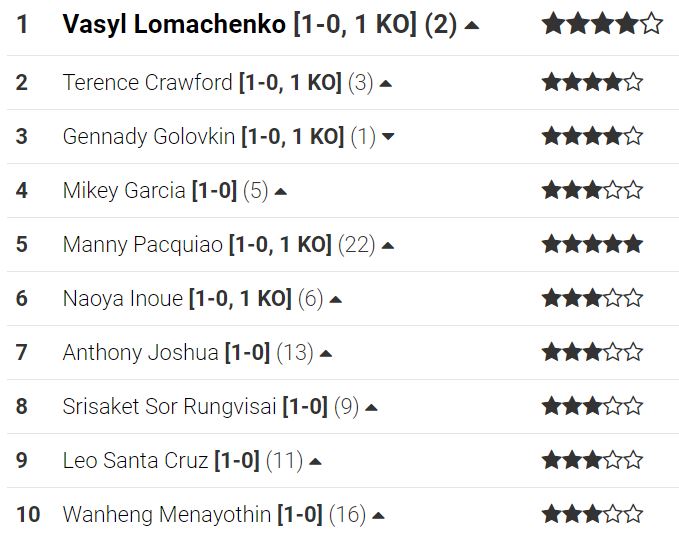 A boxing legend in his own right, Pacquiao is back in the champion stakes following a stunning performance when rolling back the years at the Axiata Arena.

At 39 years old, looked ten years younger as he dominated and dropped Matthysse to eventually pound the Argentinian into submission and take his WBA welterweight title.

Pacquiao claimed an eleventh world title in eight weight classes on the night, in what was also the Filipino Senator’s first bout without long-term trainer Freddie Roach in almost two decades.

Using a jab/straight right-hand combination and arrow-like uppercuts, Pacquiao gave Matthysse a beatdown and the now former belt holder had no answer to the continued onslaught.

Down in the third, fifth and seventh rounds, Matthysse was waved off by referee Kenny Bayless after the trio of knockdowns as Pacquiao celebrated a 60th career win and first KO since 2009 in some style.

A fight with Briton and former stablemate Amir Khan could now be on the horizon for Pacquiao who proved there’s still plenty left in the tank despite turning 40 at the end of the year.

The Khan fight could lead nicely into a 2019 battle with Vasyl Lomachenko should Pacquiao be able to overcome the Bolton man, and if a deal can be agreed.