Jaime Munguia (29-0, 25 KOs), the newly-crowned WBO Junior Middleweight World Champion of Tijuana, Baja California, Mexico, hosted a media workout today at the Westside Boxing Club ahead of the first defense of his title against former world champion Liam “Beefy” Smith (26-1-1, 14 KOs) in a 12-round main event Saturday, July 21 at The Joint at the Hard Rock Hotel & Casino, Las Vegas.

The fight will be televised live on HBO Boxing After Dark beginning at 10:00 p.m. ET/PT.

Alberto “Explosivo” Machado (19-0, 16 KOs), who will put his WBA Super Featherweight World Title on the line as he faces undefeated No. 1 Contender Rafael “Sweet Pea” Mensah (31-0, 23 KOs) in the 12-round co-main event, also participated in the workout.

Here’s what Munguia and Machado had to say during today’s media workout:

“We had a sensational training camp. We have a great team, so I feel very good. The potential fight against Gennady Golovkin really got my name out there. It allowed me to get the opportunity to fight for a world title. I’m grateful for that. I’m also grateful that the NSAC didn’t allow me to fight against Golovkin because it lead to this world title.

I’m always 100% ready. I got the call to fight Sadam Ali with only two weeks notice. The only struggle was to lose the weight, but other than that I was ready. I knew my advantage was my reach and my power. I knew that he was a smaller fighter. Those were the keys to my victory.

I feel very motivated now that I am a world champion. Everyone is going to talk about to me after this fight. This will open up more opportunities, and people will mention my name with the likes of Canelo Alvarez and Gennady Golovkin.

I think that the only advantage that Liam Smith has is that he’s fought in big events before. But I have many fights under my belt. I have a lot of experience. I had over 100 fights as an amateur. All this experience gives me a lot of confidence when I step into the ring. Also, Smith might say that he’s a natural 154-pounder, but I want to tell him that I’m a natural 160-pounder who drops down. I’m very happy with the training camp we had and very confident about this fight.”

“It’s been about 10 months since my last fight. But it served me well. It allowed me to get some rest and to work on some technical details I needed to work on. I had been boxing for 15 years straight, so it was a necessary rest.

Fighting on HBO for the first time was a dream come true. I used to gather with my friends to watch Miguel Cotto, Ivan Calderon and Felix Trinidad on HBO, so this was definitely a dream come true. The fight against Jezreel Corrales was very tough. At first, he didn’t event make weight. I knew he had a lot more experience than I did too. But I brought out the spirit that characterizes us a boxers to walk away with the victory.

For this camp, I worked on strategy and technique. I had more time to travel to Los Angeles and work with Freddie Roach. During this camp, I really got to see why he is a Hall of Fame trainer. I got to see why he’s had so many world champions. On July 21, you will definitely see a new and improved Alberto Machado.” 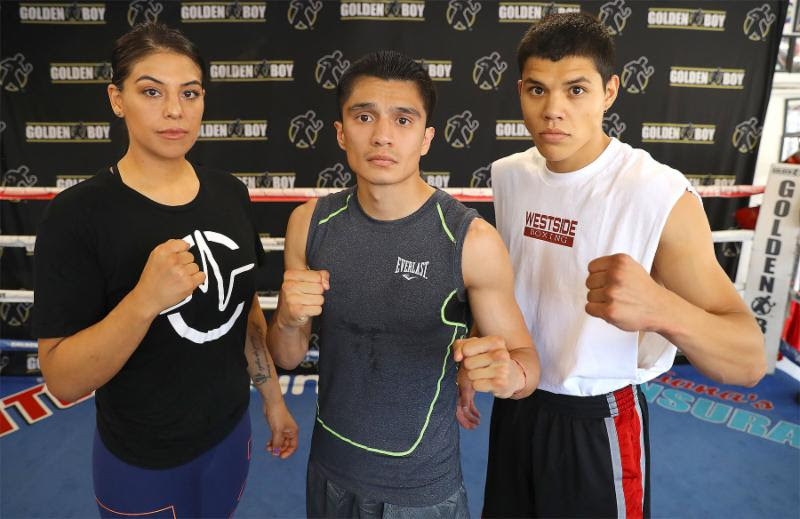 (ABOVE: Maricela Cornejo, Joet Gonzalez and Richard Acevedo pose for the media ahead of their fights on
the July 13 edition of Golden Boy Boxing on ESPN)

Fighters from the July 13 edition of Golden Boy Boxing on ESPN also participated in the workout. Rising featherweight contender Joet Gonzalez (19-0, 11 KOs) will battle for the vacant NABO 126-pound title against Rafael ‘Big Bang’ Rivera (25-1-2, 16 KOs) in the 10-round main event.

Richard “Kansas Kid” Acevedo (2-0, 2 KOs) will return in a four-round super welterweight fight against Quantavious Green (1-2-1, 1 KO) of Shreveport, La. Maricela “La Diva” Cornejo (11-2, 4 KOs) will return in a six-round super middleweight fight against Samantha Pill (3-0) of Fairmont, West Virginia. All the action will take place at The Novo by Microsoft
at L.A. LIVE in Los Angeles.

Here’s what fighters on the July 13 edition of Golden Boy Boxing on ESPNhad to say during today’s media workout:

“I can compete with all the champions at Featherweight. I’ve sparred with the likes of Oscar Valdez, Leo Santa Cruz and Mikey Garcia. And I compete with them. I’m not just a sparring partner. I give them their money’s worth. That should tell you where I am in the division. I’m excited that Golden Boy gave us the opportunity. My manager Frank Espinoza and my team really worked hard for this fight. The NABO title will open a lot of doors and opportunities, so I’m really excited about that. My best quality is being smart. There are fighters who get scared when they get touched. But I can take a punch. If we need to make it a war, I can make it a war. But because I fight smart, I know how to get someone out using my head.”

“It’s been great to feel the support from Golden Boy. We have had great meetings. That makes me confident because I know they have my back. They’re doing their part to help me, so I know I have to be in the gym doing my part as well. Samantha Pill had 10 fights as amateur. That’s six more than I did. I didn’t have that much but I’m learning on the job. She’s taller than me so I know I have to go in there smart, but I was made for this. I always knew I was meant to be successful in this sport, and I feel myself getting better and better in every fight.”

“I’m staying busy with Golden Boy Promotions, and it feels great. I’m in the best shape of my life training with the Saucedo Brothers at Westside Boxing. My opponent is a tough guy and I know I can’t go in too confident, but I’m positive I’ll come out with a great win. I feel stronger than ever and I look forward to moving up in my division to get better and better fights.”