Middleweight Michael Moore will appear on the upcoming season of the Contender.

The highly anticipated 12-episode season, from MGM Television and Paramount Television, will premiere on EPIX® on Aug. 24, 2018 at 10 PM ET/PT.

Moore of Cleveland, Ohio has a record of 15-1 with 7 knockouts.

The 31 year-old Moore, who is riding a two-fight winning streak will be able to gain worldwide exposure by competing on the popular television program.

Moore is reformed from a hard life on the street. With drugs, death and family suicide prevalent around him, Michael Moore is a natural hustler and leader. Married with two kids, Moore is constantly moving from state to state with his family in tow in pursuit of the boxing dream.

“I feel blessed to be part of The Contender series because I know there were a lot of other fighters out there that are good like me and have stories of hardship like me,” said Moore.

“At the time I was approached by Split-T Management, I was going through a rough patch in life as money was really tight, bills were piling, and I had recently pulled out of the biggest fight of my life which was going to be nationally televised due to an injury a week before the bout. I felt lost because I didn’t know what I was going to do. When I was a kid, I would hustle to make some money but as a man with a wife and two kids, I can’t get involved in those kind of stuff but I have to make something happen to keep a roof over their heads and food on their plates.” 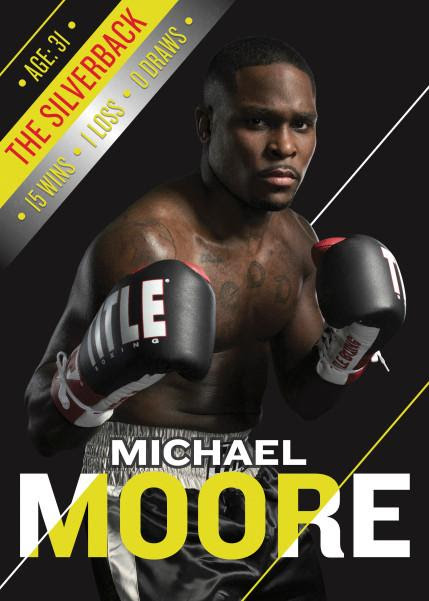 “This opportunity couldn’t come at a better time and I plan to take full advantage of changing the lives of my family.”

“I want to thank Split-T Management and people of The Contender for giving me this opportunity to change my life and when you see me, you will see a father, a husband, a man, a fighter who works his darnest because there is a lot on the line when it comes to Michael Moore.”

“When we were approached on who we thought would be great for the Contender Series, Michael first came to my mind because he is a good fighter who has such a great story behind him,” said Moore’s manager David McWater, CEO of Split-T Management. “Once you get to hear his words, and hear his story you will instantly be a fan.”