The 26-year-old is currently one of the UK’s most liked fighters as the Yorkshireman is willing to face anyone, any place, and at any time.

Allen stole the show in Paris when wearing a red beret and making his entrance to WWE legend Shawn Michaels’ ‘Sexy Boy’ theme music, despite weighing 24 pounds heavier than for his Commonwealth title challenge against Lenroy Thomas back in March. 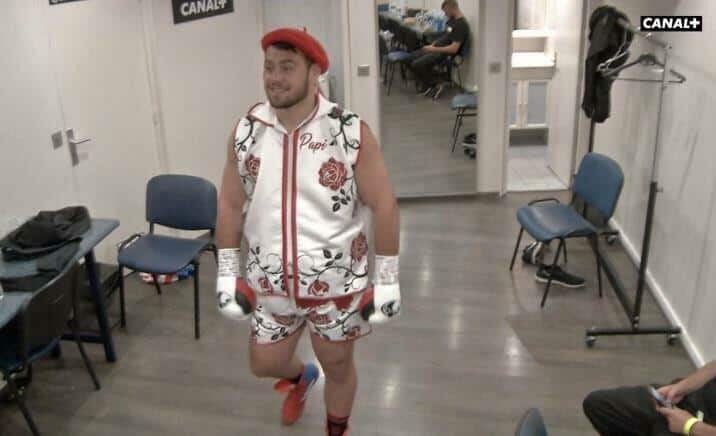 Some fans on social media have nothing but love for Allen, although some did question his choice to be so willing to mix it with solid fighters like Tony Yoka and previously Dillian Whyte and Luis Ortiz.

Some comments touched a nerve with Allen, while there is genuine worry from some who fear for his future.

One said: Anyone that knows Dave Allen, aka the ‘White Rhino,’ tell him that he’s really liked as a person.

“We want him to stop taking these kinds of fights because we like him and for his safety and post-boxing brain. There’ll ALWAYS be hate on Twitter.”

Another had said: “He needs to take full responsibility. Ultimately your advisors give you advice (but) Dave Allen makes the decision. He looked terribly unfit.

“He’s meant to be a sporting athlete, not a punching bag. On Twitter, he was saying he would fight Dubois for cheap.”

“Twitter hype ruined Dave Allen. Eddie (Hearn) capitalizing on a guy’s popularity, but the popularity was because he’s a genuine bloke, not a world-level fighter. Very poor guidance if he even had any.”

Only time Yoka got out of second gear. Allen offered nothing. I just don’t get him. pic.twitter.com/zcilAI0Z1W

The Doncaster man was battered for nine and a half rounds before eventually being saved in the final session against Yoka, taking massive punishment and not looking in his best shape.

This has led many to wonder what Allen’s next move should be after suffering a fourth defeat from his 19 contests to date.