Welterweight steps up to heavyweight, faces Danny Williams on July 28

Williams enjoyed a four-fight winning streak since suffering the 28th loss in November 2011 after relaunching his career in Europe following his UK boxing license.

‘The Brixton Bomber’ is most famous for knocking out an old and well-passed prime Mike Tyson on Pay-Per-View way back in 2004, having then challenged Vitali Klitschko for the WBC title unsuccessfully.

Fast forward 46 bouts, a run that includes 23 defeats, and Williams is still plugging away, earning a living from taking on anyone and everyone the length and breadth of the EU.

The Londoner’s latest encounter, set to go down at Aberdeen Beach Ballroom, will be against one-time LIGHTWEIGHT (135 pounds) and SUPER-LIGHTWEIGHT (140 pounds) intergovernmental belt holder McAllister. 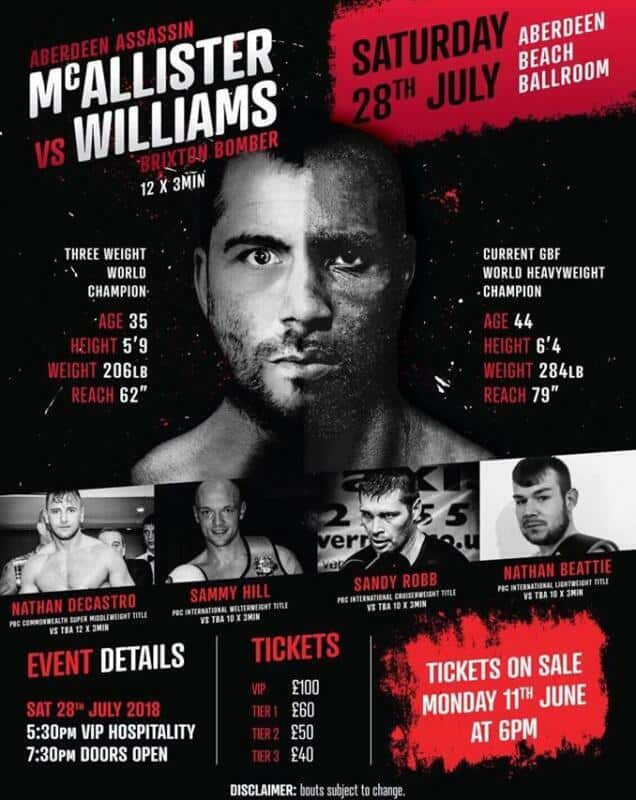 Himself fighting out of British Boxing Board of Control jurisdiction since 2013, ‘The Aberdeen Assassin’ was last sanctioned at 146 pounds and had since been plying his trade at welterweight for the past five years.

Heading as far north of the weight as he can for a one-off special attraction, McAllister will attempt to trade blows with an 18 stone brute of a man in just over one month.

The concept itself seems a strange one, but unless there’s a late change of heart change, the unlikely clash is set to go down in Scotland.

Speaking to the Aberdeen Evening Express, McAllister said the fight came about following a tongue-in-cheek comment about the possibility of facing Williams.

“Maybe I was trying to call his bluff a wee bit,” McAllister told the Evening Express.

“But he accepted. So we have the big fight now. It is going to be me against the man who crushed Mike Tyson and finished his career.

“He opened his mouth. I opened my mouth, and the fight has been made. I am not going to bottle it from anyone.”