Here is what Diego De La Hoya had to say at today’s media workout:

“This is going to be a tough fight. Salgado has the record of a knockout artist. But that doesn’t intimidate me. I’m going do a good job and show that I’m back. I’m going to show that I’m ready for a world title shot. He’s been saying a few things about me, but he just wants me to lose my focus. He can talk all he wants, but I’ll do my talking in the ring. All I have to say is that I’m going to give a great fight. Winning this fight, I want to face any champion who will give me the opportunity. But they just have to know what they will lose their title fighting me.” 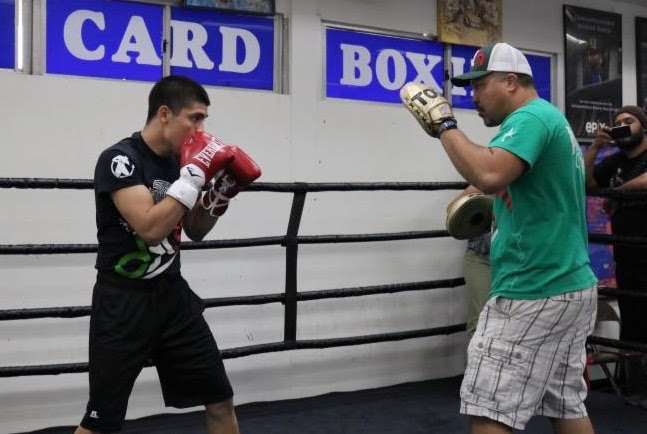 (ABOVE: Diego De La Hoya works the mitts ahead of his fight on the June 8 edition of Golden Boy Boxing on ESPN at Turning Stone Resort Casino)

Fighters from the June 14 edition of Golden Boy Boxing on ESPN also participated in the workout. Mercito “No Mercy” Gesta (31-2-2, 17 KOs) of Cebu, Philippines will battle Roberto “Tito” Manzanarez (35-1, 28 KOs) of Phoenix, Arizona for the NABO Lightweight Title in the 10-round main event from Fantasy Springs Resort Casino from Indio, Calif.

The undercard of this event will feature prospects from around the nation. Herbert “Ace” Acevedo (14-2, 6 KOs), a native of Garden City, Kansas, will take on David Thomas (6-2-1, 2 KOs) in a six-round super lightweight battle. Luis Feliciano (6-0, 3 KOs) of Utuado, Puerto Rico will participate in an eight-round 140-pound bout against against Daniel Montoya (11-6, 8 KOs) of Tamaulipas, Mexico. 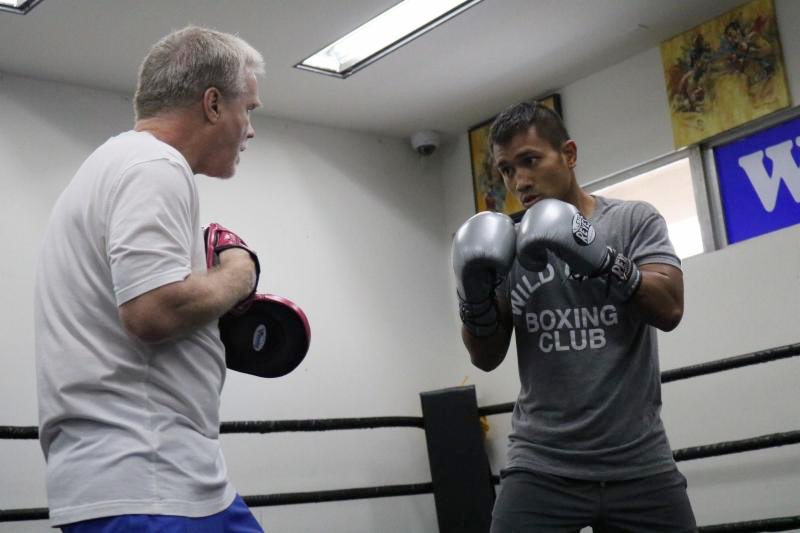 (ABOVE: Mercito Gesta works the mitts with Hall of Fame trainer Freddie Roach ahead of his clash in the main event of the June 14 edition of Golden Boy Boxing on ESPN)

Here’s what the June 14 Edition of Golden Boy Boxing on ESPN fighters had to say at the media workout:

MERCITO “NO MERCY” GESTA, Former Lightweight Title Challenger:
“I feel excited for every fight. It’s another great event. Every event that I fight I treat as something special. Manzanarez is tough, but I’ll need to figure him out in the ring. Based on the videos, it’s tough to get on the inside because he’s tall, long and knows how to use that as advantages.”

“I learned from my world title fight. It boosted my confidence because I did so well against a great fighter. Every opponent is different and has different styles. I can’t look down on this guy. He’s not a stepping stone, and I will treat him as a world champion. I see myself fighting for a world title again soon. I still feel strong and ready. I still have a long way left in my career. I want any champion in the division. I’m always ready to take a fight.”

MANNY “CHATO” ROBLES III, Featherweight Prospect:
“This is an exciting moment to be taking a step up like this. I know he’s an undefeated prospect but this will put me on the map. We’ve know each other for a long time, and he’s a great fighter. Skill wise, I think I’m the better fighter. I don’t see him having any advantages. After this, I see myself moving up the rankings and eventually fighting for a world title. Fighting for a world title has been a dream of mine since I was a baby.”

EDGAR “KID NEZA” VALERIO, Featherweight Prospect:
“It’s God’s divine plan, and I’m here to listen, learn and follow instructions for my mentors and coaches in order to prevail. Some people call it a risk, but it had to be done. And what better way than on ESPN. It will be a great a performance. I think we are both equal. He’s a human being. I’m a human being. I have five senses, and he has five senses. At the end of the day, it’s about who is a better student of the game. They say this is a challenge. I see it as another opportunity to learn.”

LUIS FELICIANO, Super Lightweight Prospect:
“I feel great, and I’m thankful for the opportunity to fight again in California. It was great to fight in Puerto Rico so many times in front of my friends and family. It was a great experience. Now I’ll be fighting again at Fantasy Springs, and I’ll know it will be a great show.”

HERBERT “ACE” ACEVEDO, Super Lightweight Prospect:
“I’m feeling good. I’m finally with Golden Boy, and I’m ready make my mark. I’m thankful for this opportunity and I’m ready to showcase my talent and the hard work we put into this camp. It feels great to be back after a year. I just turned 27. I’m not getting any younger, so it’s time to step it up and move my career quickly.”

De La Hoya vs. Salgado is a 10-round super bantamweight fight for the NABF and NABO Super Bantamweight Titles presented by Golden Boy Promotions and Don Chargin & Paco Presents. The event is sponsored by Tecate, “THE OFFICIAL BEER OF BOXING” and Hennessy, “Never Stop, Never Settle.” The fights will take place on Friday, June 8, 2018 at Turning Stone Resort Casino in Verona, N.Y. ESPN2 will air the fights at a delayed start time of 12:30 a.m. ET/9:30 p.m. PT. ESPN Deportes will air the fights the following day at 9:00 p.m. ET/6:00 p.m. PT. ESPN3 will steam the fights live beginning at 9:00 p.m. ET/6:00 p.m. PT.

Tickets for this matchup are on sale and are available from $34 and $85 for the first two rows ringside, $70 for remaining ringside seats and all others priced at $49, $45 and $39 plus any applicable fees. Tickets can be purchased at the Turning Stone Resort Box Office in person or by calling 315-361-7469 or online at Ticketmaster (www.ticketmaster.com).