Undefeated prospect Richard “Popeye The Sailor Man” Rivera finished off Kevin “The New England Bully” Cobbs in the third round, punctuating the night with an lethal uppercut that landed right on the button, headlining last night’s “New England’s Future 5” card, presented by Rivera Promotions Entertainment, at The Palladium in Worcester, Massachusetts.

The 27-year-old Rivera (6-0, 5 KOs) fought once again in front of his large, traveling fanbase from Hartford, CT, capturing the vacant Universal Boxing Federation (UBF) light heavyweight title in dramatic fashion. The charismatic Hartford boxer ended his third consecutive match with what has become his trademark right-uppercut.

Rivera used his strength, energy and determined will to defeat South Boston’s Cobbs (10-3, 4 KOs), whose previous fight had been more than a year ago, when he was stopped in the second round by now world champion David Benavidez.

In only his sixth pro fight, the key question going into the bout was whether Rivera was ready to effectively step up in class to face a more experienced Cobbs. Right from the opening bell, the answer was a resounding, yes, as Rivera pounded Cobbs with powerful shots to the body and head.

Cobbs was dropped three times in the third round, one was ruled a push, and the end came when referee Jackie Morrell halted the action at the 2:51 as a reeling Cobbs was blasted backwards from the Rivera’s previously mentioned uppercut. 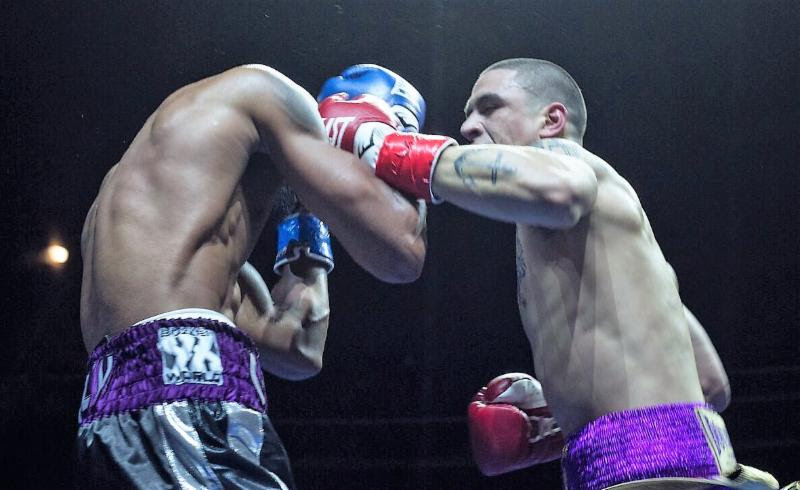 “I stepped things up in the third,” Rivera explained. “He stopped throwing as many punches in the third and was ducking in. I said I wasn’t going to look for the knockout but, if it came, I’d take it. I got him with my uppercut. I respect Cobbs and thank him for giving me this opportunity.”

In the second round, Pagan, of Southbridge, MA., drilled Abraham who went flying across the ring and into the ropes as referee Jackie Morrell halted the bout. Springfield, MA junior middleweight Derrick “Bad Boy” Whtley (3-0) cruised to a dominating four-round unanimous decision over Cleveland’s Roger Blankenship (1-3), pitching a complete shutout in the process.

Bridgeport, CT welterweight Joe Goss (1-0) turned in an impressive pro debut, dropping Montreal’s Samuel Vasquez (1-3, 1 KO) in the second round on his way to a four-round unanimous decision. Puerto Rican junior lightweight Luis “Lobito” Rivera (4-3, 1 KOs) overcame a nasty cut over his eye to win a hard-fought four-round majority decision over Carlos Marrero, III (0-2), of Bridgeport, CT, in a non-stop action fight to the finish.