Higgins had previously sent out a press release accompanied by a video of Joshua being rocked several times when trying to initially secure the fight, which stated: “Parker has a granite chin whereas Joshua may have a glass jaw. Joshua has been dropped numerous times.

“It’s the worst keep secret in British boxing, but no one really talks about too much. Perhaps it’s because Hearn and Joshua are quite powerful in the sport. It’s like the emperor’s new clothes.

“There’s no disrespect here as all footage is already in the public domain. The only thing disrespectful is Hearn and Joshua’s lowball offer.

“We are simply highlighting one of Joshua’s major weaknesses, namely his chin, as those who have dropped Joshua include: 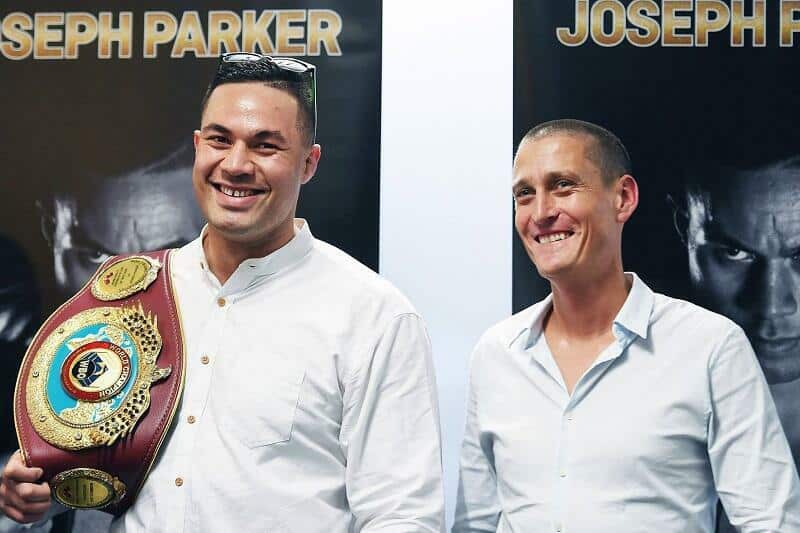 “We also believe there are more people who have dropped Joshua, so our first offer to UK fans is to send us proof that you also dropped Joshua, and we’ll send you a gift.”

Hearn, sitting next to Higgins at the press conference with Joshua just a short distance away, asked the Duco boss to refresh everyone’s memory on what had been said.

Fumbling a little, Higgins pointed out: “He (Joshua) showed being rattled a touch. Then there is the questionable chin. We’re not saying he has a glass jaw, but we are going to find out on March 31.”

Hearn then interjected and asked Higgins not to ‘let his bum deceive him’ – alluding to Parker’s handler possibly not wanting to repeat his thoughts in front of Joshua.

“You can’t say what you’ve been saying, and then when you’re five feet away from him, you can’t let your bum deceive you,” outlined Hearn.

“You also said, ‘he has a glass chin, we are going to break his glass chin!’ – But don’t tell me, tell him (pointing to Joshua) he’s here!”