The Kazakh puncher, who recently scored a moral victory over Canelo Alvarez despite the fight being a draw, moves up by default following Ward’s removal.

Ward, 33, decided to hang up his gloves after a stellar undefeated career, which included becoming undisputed in two weight divisions.

Golovkin, a three-time WBN Fighter of the Year previously in 2013, 2014 and 2015, had been unable to overhaul Floyd Mayweather during this dominant period, and even once the American settled into his first retirement on the back of defeating Manny Pacquiao and ex-world champion Andre Berto, the emergence of Roman Gonzalez thwarted ‘GGG’ in September 2016.

A couple of months later, Ward took the mantle with an exeptional win over Sergey Kovalev, which the ‘S.O.G’ then repeated in June of 2017. 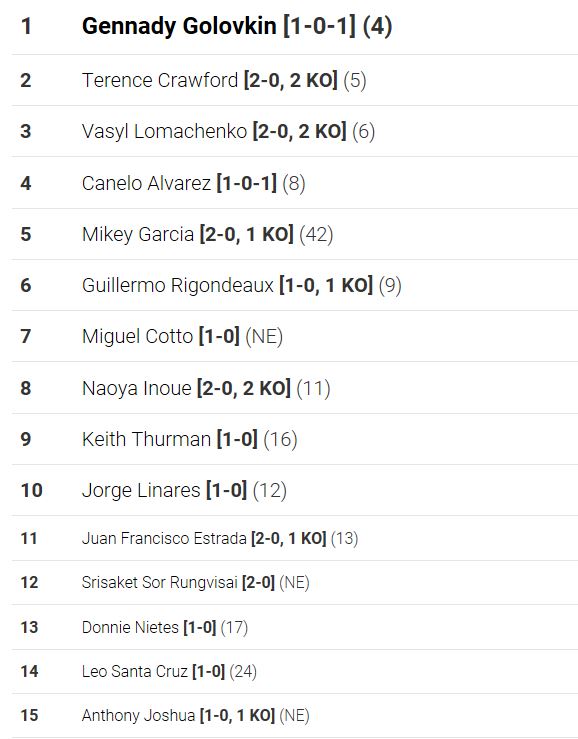 Now, and at the age of 36, Golovkin finally hits the pinnacle of his career and is recognised as the best fighter on the planet as talk of a further unification with Billy Joe Saunders and a rematch with Canelo continue to grow.

It’s possible Golovkin could be willing to challenge Saunders for the WBO title in December before a meeting with Canelo in the spring of 2018, although the latter’s promoters Golden Boy may well insist on an immediate return only.

All will be revealed in the coming weeks, but for now, Golovkin can enjoy the fruits of his considerable labour and take his place as the top boxer on the planet.