‘Hi-Tech’ overtook Roman Gonzalez and Terence Crawford in the ratings to sit just behind middleweight king Gennady Golovkin on the list.

Ahead of his rematch with Sergey Kovalev this summer, Andre Ward remains on top of the pile, followed by eight-weight and current 147 pound champion Manny Pacquiao.

The next big bout which could see a shift in the top ten comes when Canelo battles Julio Cesar Chavez Jr. on May 6 in Las Vegas. 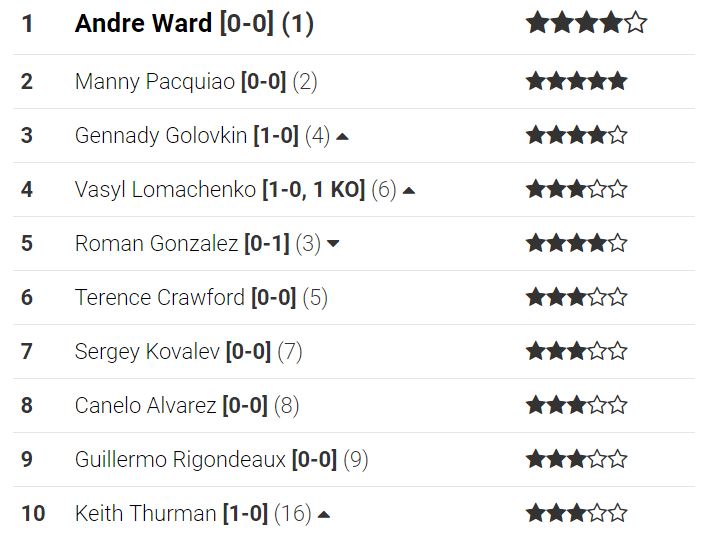 On Saturday night, Lomachenko proved he’s by far and away the best super-featherweight on the planet as the Ukrainian amateur legend saw off the challenge of Jason Sosa in nine rounds at the MGM National Harbour at Oxon Hill. Maryland on Saturday night to make it eight wins against one loss as a professional.

The lightweight world title holder had his hand raised to make it eight wins against one loss as a professional.

Displaying dazzling skills and a confidence beyond his nine bouts without the vest, Lomachenko once again proved his credentials in what was already the 29 year-old’s eighth world title fight.

Retiring Sosa in nine rounds, Lomachenko then turned his attention on any of the other divisional title holders, or failing that, he’ll seek to move up and face Mikey Garcia or Terence Crawford at 135 or 140.