The middleweight king seemed bereft of ideas at times during his twelve round points victory over Jacobs as his American opponent shaded the fight 114-113 on WBN’s unofficial scorecard.

‘GGG’ eventually gained the decision from the judges, although his air on invincibility was damaged ahead of a potential unification with Billy Joe Saunders in June.

The tough Kazakh trades place with Gonzalez, who only lost his place out of respect for Srisaket Sor Rungvisai, who pushed the Nicaraguan hard despite seemingly losing the fight according to the punch stats and WBN’s co-feature card (115-111). 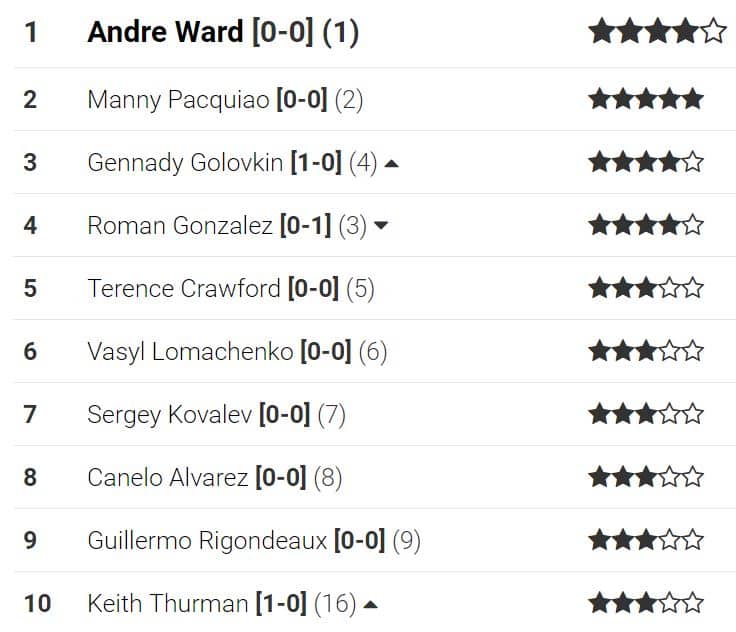 As Golovkin and Gonzalez switch positions in the top ten, Jacobs still moves up slightly further down the list due to his commendable effort – that on a different night would have seen him crowned the new top dog at 160 pounds.

New WBC super-flyweight ruler Rungvisai has gatecrashes the top 20 for his part, whilst former foe Carlos Cuadras – who could be his first challenger, made a slim move north due to a tight win over David Carmona on the Madison Square Garden undercard.

The top two remain unchanged as Andre Ward and Manny Pacquiao lead the way, whilst Tony Bellew has dropped out following a brief spell in the top 50.