“I told you what I was going to do tonight,” said David Lemieux. “What I saw was a ‘check mate’,” said Lemieux. “The punch was made with perfect landing. I am in great shape, and I prepared myself for him. He is physically strong but nothing special. Stevens is a solid fighter, and we were successful. I wish him the best, and I hope he is OK.”

In his highly anticipated return to the ring, Cuban stand out Yuriorkis “El Ciclón de Guantánamo” Gamboa (26-1, 17 KOs) secured a unanimous decision win over Nicaragua’s Rene “Gemelo” Alvarado (24-8, 16 KOs) as the televised co-main event. Gamboa demonstrated his power and resilience in his return to the ring, with the judges scoring the bout 97-92, 97-92, and 97-93. 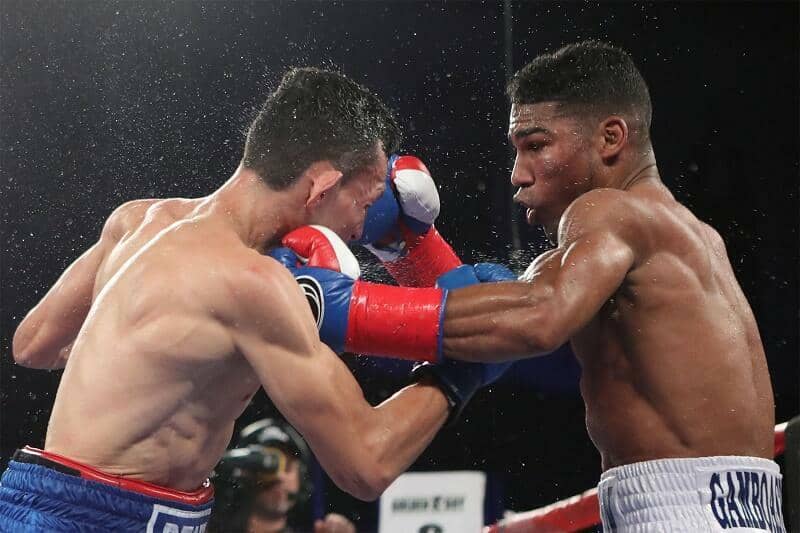 A part of the international broadcast, Zachary “Zungry” Ochoa (16-1, 7 KOs) suffered his first career loss against the mighty Yves Ulysse (13-0, 9 KOs) for the vacant Junior NABF Super Lightweight title. Yves turned up the heat during the fourth round, showing off his reach and powerful left arm and right hook combinations that left bruises under Ochoa’s right eye. The fire was completely unleashed during the seventh round, and Ulysse cornered Ochoa landing powerful straight right arm punches. Ochoa’s corner waved the white towel before the eight round could begin, awarding the technical knock out and NABF belt to Ulysse.

“I dedicate this victory to everybody that doubted me,” said Yves Ulysse. “I did my homework and beat him in his hometown. This is just the beginning of the adventure. Ulysse Nation, that’s the name to remember.”

“Mexican fighters are tough, and he has fought tough opponents,” said Diego De La Hoya. “I was expecting the fight to be tough; it’s been a while since I have been in the ring, and this was perfect to upkeep all my skills.”

In another knock out performance of the night, D’Mitrius Ballard (16-0, 12 KOs) knocked out Zoltan Sera (26-12, 17 KOs) during the fourth round. During the third, Sera lost a point for lifting Ballard by the calves in attempt to block his punches.

“He was definitely fighting to survive in the ring with me,” said D’Mitrius Ballard. “When he picked me up, I could sense his desperation – my corner kept yelling at me to finish him off because a fighter that was unpredictable like him could seriously hurt me.”

Making his pro-debut, Alex Rincon (1-0, 1 KO) of Carrollton, TX made an exceptional first impression to the boxing world in a second round knock out of Ardmore, Okla.’s Shaun “Buddy Hollie” Lee Henson (2-4, 2 KOs).

“It’s always such a great feeling coming back to the locker room with a win like this,” said Alex Rincon. “There’s a huge difference from fighting in the amateurs to the pros, from the size of the gloves to the atmosphere the crowd brings. I’m ready to continue to grow and get more knock outs like this one.”

“It’s another win, and I’m just glad I get to be under the Golden Boy banner,” said Unthank-May. “Bernard Hopkins is my inspiration, and I hope to have a career like his.”

Lemieux vs. Stevens was a 12-round middleweight bout for the WBO Intercontinental and WBC Continental Americas presented by Golden Boy Promotions in association with Eye of the Tiger Management and Main Events, and sponsored by “Tecate, BORN BOLD.” The HBO Boxing After Dark® telecast began at 11:00 p.m. ET/PT.