The 28 year-old, who announced his comeback to boxing earlier this week, has admitted piling on the pounds in semi-retirement but feels better in himself as Fury readies for a fight in the coming months.

“I’m starting a fresh start, letting go of the past and concentrating on the future. (I’ve) got to keep moving forwards,” said Fury.

“I’ve moved on from the dark and scary place I’ve been living. If I can beat depression then I can beat anything. The hardest fight of my life!”

On several publications labelling him ‘fat’ since the one-time top division king backed away from the sport following an upset win over Wladimir Klitschko, Fury pointed out that shedding timber has never been a problem for him in the past. 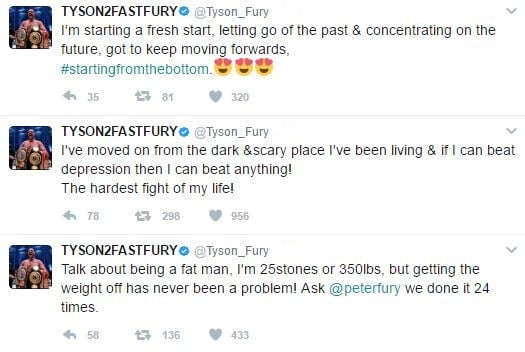 Fury is being linked to a massive domestic clash with Tony Bellew in the summer, although will possibly need to feel his way back before contemplating taking on any of the main contenders.

The likes of Deontay Wilder, Anthony Joshua or indeed a rematch with Klitschko seem a world away at this point but it’s good news that Fury is feeling more like himself as boxing has missed his lively presence for almost a year.