Also in attendance and featured in televised action beginning at 8 p.m. ET/5 p.m. PT were rising super welterweight contenders Tony Harrison and Jarrett Hurd, who battle for a vacant junior middleweight world title, plus hard-hitting Dominic Breazeale and undefeated Izuagbe Ugonoh, who meet in a 10-round heavyweight battle.

Tickets for the live event, which is promoted by DiBella Entertainment and TBG Promotions in association with Bruno Event Team, start at $25 (not including applicable fees) and are on sale now. Tickets are available through Ticketmaster and by visiting AlabamaTitleFight.com.

Here is what the fighters had to say:

“My time off has allowed me to get a better relationship with my left hand. There are so many different ways to throw a jab that I didn’t think I could do. Working with one arm allowed me to be exposed to a lot of new things. It’s going to be a different Deontay Wilder in the ring.

“It’s been a journey for me. I know there’s a purpose to all of it and there’s a reason why I’m here and why I’m the champ. Everything has manifested my way.

“This is a fantastic card on Saturday night and I know these other guys can’t wait to get into the ring.

“Saturday night is going to be an electric fight. I love my state and I love being able to come back to Alabama. Home is where my heart is. It feels good to continue to give back.

“I’m overwhelmed. I’m so ready for this fight. Everyone has a story to tell. Everything that has happened with my opponents is in the past. I’m in love with this sport. I have a goal to reach in this sport and I will reach it.

“I want people to look back on my legacy and see that it was a long journey. I’ve paved the way for my city and my state. I’ve laid the bread crumbs and now people can follow.

“When my first opponent dropped out, the first name that came to my mind was Gerald Washington. I appreciate the way he conducted himself. Every time I saw him, he always shook my hand and told me he was ready.

“I know Gerald is excited. I was too. I know what it’s like to be able to fight for one of the most prestigious belts in the world. But, it’s my belt. I’m still enjoying it. Even though I’m heavyweight champion of the world, I’m still humble. I keep the belt in its case, until it’s time for me to fight again. I’m not satisfied. There is still more to attain.” 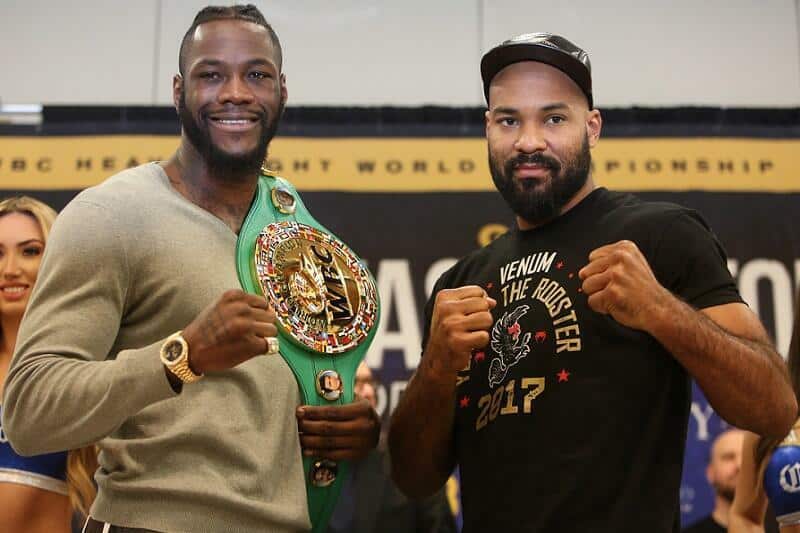 “I’ve had an incredible run to get me here. I’m thankful to Deontay for picking me for this fight. He could have chosen a lot of opponents, but he picked me and I’m grateful for that.

“This is a dream come true. I started boxing as a kid but I didn’t know what I wanted to do. I’ve had a long road, but now I’m here fighting for the heavyweight championship of the world. This just means so much to me.

“My trainer John Pullman and I started working together and we’ve gotten through every obstacle. It’s hard work but we put in the work together and now we’re here. That’s what life is all about. You have to take risks and when it’s time, it’s time to handle your business. It’s my time and I’m ready.

“I’m so happy to be able to do what I love. I’m going up against Deontay Wilder, the Bronze Bomber, in his backyard. You can’t take away what he’s accomplished. But I’m here to handle my business. 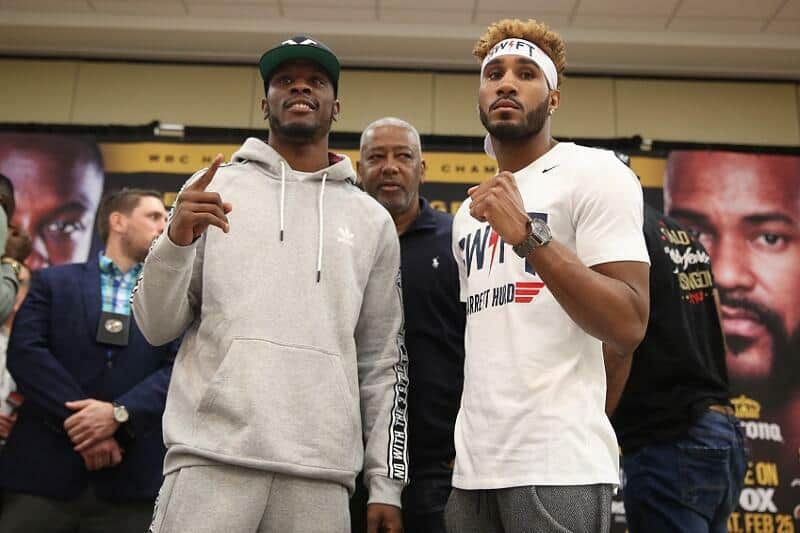 “As a competitor, I was already excited about the fight when they called me about fighting Hurd. I said yes immediately. Jarett Hurd’s name is mentioned every time you mention the 154-pound division. I started this off wanting to be the best and to do that, I have to beat the best.

“I think we have mutual respect heading into this fight. He respects me just as much as I respect him. But Saturday night, I’m looking to gain my respect as a fighter. For both of us, I think a lot of questions have been raised about who we’ve fought. These questions are answered on Saturday night.

“This is a fight where you have to respect both fighters. The city of Detroit is coming out to see me bring this world title home and I’m sure Maryland is expecting the same from Hurd. It’s going to be a great atmosphere.

“From the time that I started at six-years-old, this day has been the pot at the end of the rainbow. I’m fighting a great fighter for a great belt in a great weight class.

“I just have to go out there and take it one round at a time. I believe that I have too much in the arsenal. I can’t get too excited, even if I see an opening to stop the fight, I’m going to do it the smart way. I’m in shape to go 12 rounds but if I see my opportunity, I’m going to take it.

“I’m looking to continue the legacy. It’s going to be an amazing fight. I love Deontay, but I’m looking to steal the show. This is the best division in boxing. I’m coming out hard and I know my opponent is too. We’re both ready to lay it all on the line for this world title.”

“We were excited when we first got the fight with Tony Harrison and we were even more excited when we found out it would be for a world title. This is every champion’s dream and I get a big opportunity on a big network. Everyone gets to see who Jarrett Hurd is.

“This means everything. Staying undefeated is something that opens a lot of doors for you. I’m in quality fights so I’m doing something well. I have another great opponent in front of me, but on February 25 I will be a world champion.

“We had a really good long training camp. I didn’t need to do anything too drastic to make weight. I’m a big fighter for this division but I’ve never had a problem with weight. I can’t wait to get in the ring.

“My father was born in Birmingham, Alabama so to be able to have my world title shot here is exciting for my whole family. This is a big fight for me. I’ve trained hard and I’m prepared for it.

“I want this fight to answer a lot of questions. Some people say I’m not the fastest or that I don’t have enough defense. I want to be an undefeated fighter but I also want to build a legacy. I want to be on the platform with the best. I think this fight will give me that credibility.

“My time is here. There will be a new 154-pound champion on Saturday night. My pants are falling down and I need my belt!”

“It’s great to be back on this stage. I’m ready to come back and show my boxing skills. Deontay and Gerald are going to put on a great show and I’m excited to be a part of it.

“My opponent is definitely an unknown character. We prepared for everything to get ready for a guy that will move a lot. It’s big for him to be fighting on a big card like this for his first U.S. fight. I’m glad he took the fight.

“I just need to be a pressure fighter. I’ve been down and gotten up. I’ve been in there with the best. I can’t let him get comfortable. I’m going to bring him a kind of fight he’s never seen before.

“I’ve been training hard with Manny Robles and we’ve done some phenomenal things over the last 10 weeks. I’ve been on the big stage and I’m ready to do it again. I feel good and I’m prepared put on a show.”

“I’ve been training in Las Vegas for three years and I’m very excited to make my U.S. debut Saturday night. It’s a great opportunity and I’m glad to get a big fight straight away against a good former title challenger who is also an Olympian. I couldn’t have wished for anything better than this.

“I’ve watched a lot of Dominic’s fights, even before I knew I was going to fight him. We know what he’s good at and we know where he makes mistakes. All my training partners were taller than me, so I’m comfortable fighting against big guys.

“For me, this is everything. If you’re a fighter and you train hard to be a champion, then this is the stage you want to reach. When you get here, the question is, are you comfortable with it? I’ve always believed that this is where I belong and now I have the opportunity. Now I just want to have fun and do what I do best.

“I think this is going to be a very explosive fight. I’m in the best shape I’ve ever been in. I prepared for a better Dominic Breazeale than who fought Joshua. I think it’s going to be a beautiful night.

“My road has been very rocky. I’ve fought all over the world, but everything happens for a reason and happens at the right time. The time is now for me.”

“I’ve had a great camp. I know everyone says that, but this really has been my most productive camp. I’ve had great sparring since I moved to Las Vegas. It’s going to be fireworks on Saturday.

“I know my opponent has been in there with some tough guys. He’s never been stopped. That’s what we want. Soft touches won’t get me to where I’m headed. This is my closest fight to my hometown of Nashville since I turned pro so I’m expecting a lot of support.

“I’m not here to take the easy road. It’s my time now. This is a great opportunity and I think it’s going to be a great fight. I’m excited to get in the ring.

“Coming from where I came from, all of this is surreal. My hard work got me here. I’m blessed to be here and I feel like I deserve it.

“Everything went so smoothly during camp and now it’s time to put it together in the ring. I’ve always been able to show out when the pressure’s on.

“I’m looking to win and win in impressive fashion. I’m going to have a strong defense but I’ll have to put the heat on him. This is the kind of pressure I love.

“I want big fights. I’m focused on getting myself better every day. I have a great team around me and I feel like I can beat anybody.”