“Every day I train hard to get to this moment,” said Nguyen. “I’m thankful to everyone who was here to watch this performance and I’m ready to take on bigger and better challenges.”

Flores started out trying to work off of the jab and impose his size and reach advantages on his smaller but more seasoned opponent. Nguyen was prepared for Flores’ usually lethal left hook to the body and was able to deflect it while finding a landing spot for his right hand.

The power punch made its first mark late in round two when Nguyen’s right hand hit Flores flush on the chin and sent the hometown prospect into survival mode for the remainder of the round. Flores continued to come forward and control moments of the fight, but Nguyen was consistently able to respond with more powerful punches. 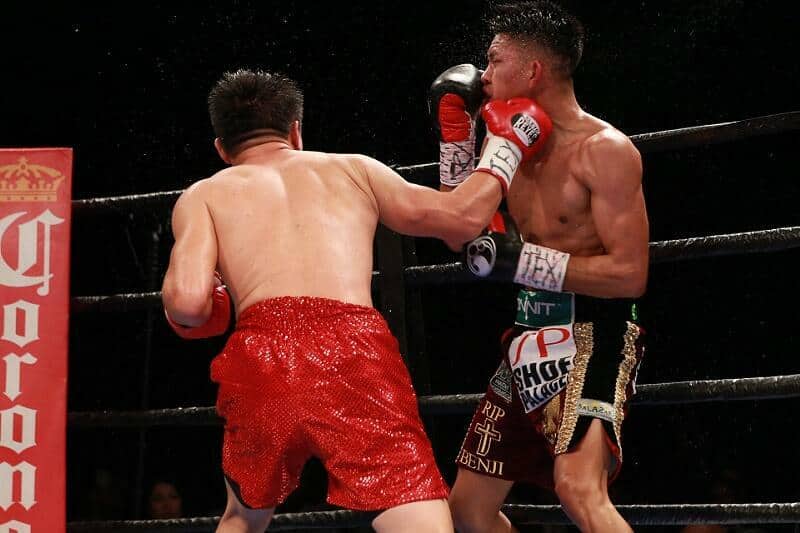 “Flores is a warrior like all great Mexican fighters,” said Nguyen. “That is the style I try to fight with too. I fight with that heart every time I’m in the ring. Flores came in fighting like a warrior but it didn’t work out for him.”

As the fight entered the second half of the scheduled 10 rounds, Nguyen caught Flores with several big hooks during an exchange against the ropes that sent Flores crashing hard to the canvas. Flores got to his feet but was clearly dazed as he attempted to hold on to Nguyen to survive the round.

Nguyen was able to remain patient enough to land a series of hard clean blows to Flores that forced referee Laurence Cole to call a halt to the bout at 1:02 in the sixth round. Flores was unable to give post fight comments due to a busted lip that required stitches.

“Miguel Flores is a tough guy and he’s going to be a champion one day,” said Nguyen. “Today was my day to win. I’ve been here 13 years as a professional and I finally got my shot at the top. I’m thankful to everyone who believed in me.”

In the co-main event of the night, unbeaten Darwin Price (12-0, 6 KOs) rode a crisp jab to a unanimous decision victory over Hylon Williams (16-4-1, 3 KOs) in their eight-round super lightweight bout.

Price set the pace early by establishing his jab and throwing it often including doubling and tripling up on the punch to begin his attack. Price was able to work in a solid overhand right hand and a left hook that busted Williams’ nose late in round two.

Williams remained on the defensive for most of the bout while only opening up his attack slightly in the second half of the fight. Price was able to hold off Williams when he did charge forward, including an exciting exchange late in round six.

Price was able to stay focused and continued to dominate every frame of the third eight-round bout in his pro career. After the final bell rang, all three judges scored the bout 80-72 for Price.

The opening bout of the telecast saw unbeaten prospect Brandon Figueroa (11-0, 8 KOs) put on an impressive performance in dominating Raul Chirino (10-5, 5 KOs) before stopping him in the fourth round of their super bantamweight matchup.

Chirino was aggressive early in attempting to close the distance against the taller Figueroa but the Weslaco, Texas-product set the tone by investing to the body with huge hooks from both hands.

Figueroa’s body punching and work rate began to pay dividends in round three when he scored the first of his three knockdowns with a flurry of hooks to the body that sent Chirino down midway through the round. Chirino was able to get to his feet but Figueroa pounced on his wounded opponent and sent him back to the canvas with more thunderous hooks to the body.

Chirino arose once again and was able to narrowly survive the round, but Figueroa was gearing up for a big finish and finally landed the massive right hook to the body in round four that sent Chirino down for good. Referee Laurence Cole waived off the bout 1:30 into the round.