The event drew thousands of fans and hundreds of media to watch Canelo and Chavez, Jr. in their first face off ahead of their anticipated clash on Cinco De Mayo weekend, Saturday, May 6 at T-Mobile Arena in Las Vegas.

Below are what the fighters and their teams had to say at the press conference:

“I think that a rivalry does exist, and we are both polemic fighters. There have been a lot of comments directed towards me and my character, and I fight for pride to represent my country.

“With Nacho Beristain in my corner, I have a lot of knowledge on my side. It’s symbolic because he has his name etched as one of the greats, and this is a tribute to him and is a contribution to Mexican boxing. Canelo isn’t Oscar De La Hoya’s son. I’ve got a great corner. I am going to win this fight.” 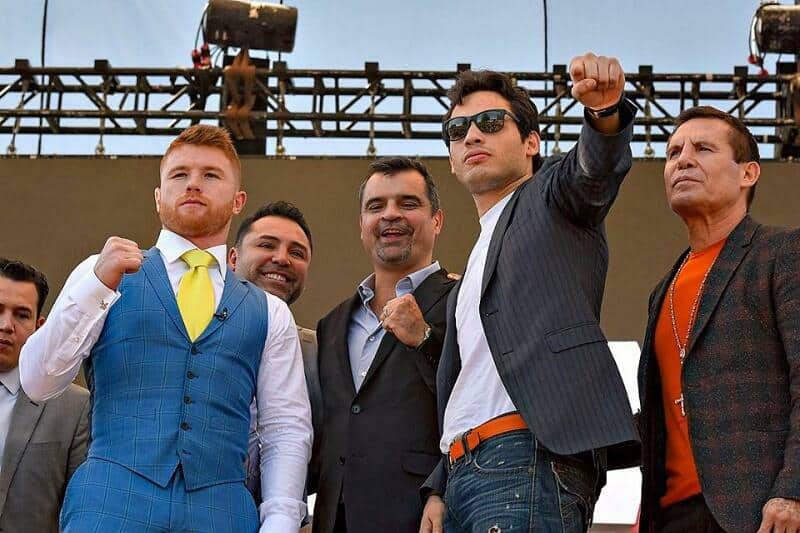 “It’s always a pleasure to be here in Mexico, and I want to thank TV Azteca and our sponsor Tecate for always supporting us. This is going to be a great fight, between two Mexican warriors who want to be remembered as the best. We all know who will be watching – President Trump-and he will see the great contribution that Mexicans have to offer, and how we get things done.”

“I want to thank Golden Boy, Canelo and the Chavez’s for the opportunity to bring another great fight. These fights- much like the many that have been precedent to it go beyond just being wars but represent a Mexican pride. It’s always a pleasure to be a part of these fights. It’s going to be a war in the ring, and I have full confidence that we will get the result we are training for. Mexico versus Mexico is one of the greatest fights you can see in the world. Nacho has contributed much to boxing, but I am a part of the new generation of trainers. At one point, Nacho was where I am now. We are the new generation, and we are here to make history.”

“We are so thankful for all the support we have received. We have to recognize the sacrifices that both fighters have made to make this fight possible for all the fans who have been asking for it. Julio will have to drop to a weight and Saul will have to go up to a weight he hasn’t fought at. What will happen on May 6 is an arena filled with thousands of Mexicans who will come together to sing the Mexican national anthem together, and show the US that we are more unified than ever before.”

Canelo vs. Chávez, Jr. is a 12-round fight presented by Golden Boy Promotions and sponsored by Tecate, BORN BOLD, Adriana’s Insurance and Interjet. The event will take place on Saturday, May 6 at T-Mobile Arena and will be produced and distributed live by HBO Pay-Per-View® beginning at 9:00 p.m. ET/6:00 p.m. PT.