Prestonpans’ native Josh Taylor, 8 (7) – 0, is the hottest prospect in British and Irish boxing. The Commonwealth super lightweight champion has lit up the pro game since he turned professional in July 2015 with a debut stoppage victory over Archie Weah in El Paso, Texas, USA. ‘The Tartan Tornado’ has produced some electric performances in the past eighteen months, including an immensely impressive fifth-round knockout victory over Derby’s Dave ‘Rocky’ Ryan for the vacant Commonwealth super lightweight title last October at the Meadowbank Arena.

That night Taylor proved he possesses the full array of skills needed to be a world class operator, blitzing the previously unbreakable Ryan and dropping the Derby man twice on the way to a comprehensive title winning performance. Last time out the popular Taylor dominated durable Arizona contender Alfonso Olvera on his Las Vegas debut. That lopsided eight-round points victory was one of the live featured bouts on Showtime in the USA, a hugely impressive step for the twenty-six year old 2014 Commonwealth Games gold medallist.

On March 24 Taylor faces off against one of his most experienced opponents to date in South African super lightweight champion Warren ‘The Warrior’ Joubert. The thirty-five year old Joubert, 26(11) – 4 – 5, fights out of Johannesburg’s Hot-Box gym under the tutelage of trainer Colin Nathan, and has defended his South African title twice in the last eight months since regaining it from fellow Johannesburg native Grant Fourie. Along the way Joubert also picked up the vacant WBA Pan African title and has beaten some tough domestic rivals such as Jason ‘Badman’ Bedeman.

On March 24 Joubert will have his toughest fight of his career and the all-action South African champ will be looking to bring the heat when he challenges Scotland’s golden boy Josh Taylor at Edinburgh’s Meadowbank Arena. The stage is set for a classic Northern Hemisphere Vs Southern Hemisphere dust-up.

The Edinburgh crowd are in for a huge night of boxing on March 24 as Taylor vs Joubert headlines a stellar night of boxing at the Meadowbank Arena. Edinburgh’s undefeated Celtic super lightweight champion Jason Easton takes a big step up in class when he boxes Hungary’s dangerous Zoltan Szabo in an exciting ten-round super lightweight contest that acts as the chief support bout of the evening. The talented Easton was dynamite in his last outing at the Meadowbank Arena when he destroyed Cardiff’s Rhys Saunders for the vacant Celtic super lightweight strap. In Hungary’s Szabo he faces his toughest test to date against a man who has stopped Ireland’s contender Stephen Ormond on a previous visit to these shores and defeated Wales’ then unbeaten Zack Davies in London last March.

Also on the bill, Kelty’s undefeated middleweight prospect Connor Law takes on Germany’s experienced Nico Salzmann in an eight-round contest, while Haddington’s former Scottish International Iain Trotter boxes in a four-round middleweight contest against an opponent to be named shortly. 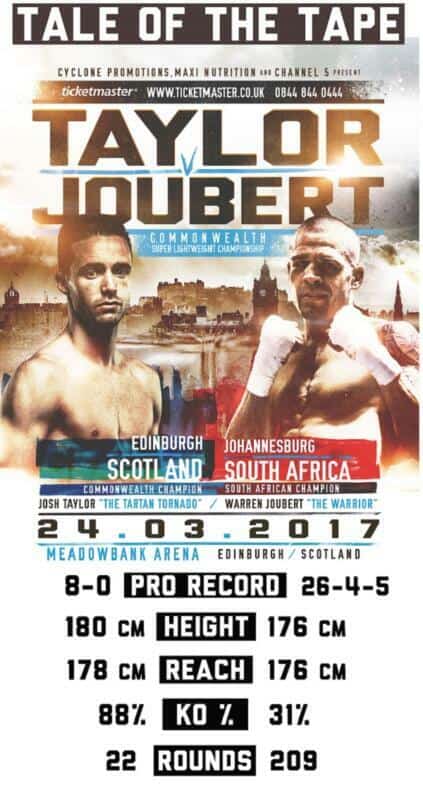 JOSH TAYLOR: “I’m buzzing for this fight. I can’t wait to defend my title in Edinburgh in front of my home fans. It was a terrific atmosphere last time at the Meadowbank in October and I’m expecting another big night on March 24.

“Warren Joubert is a tough man and the South African champion so I know he means business. He has an attacking style and from what I know of him he always comes to fight, so it should make for a cracking contest.

“To be headlining on Channel 5 for the second time in six months is brilliant, the exposure the channel brings is unbelievable and I’m very grateful. I’ll now head back down to London to work with Shane and the team and fully focus on defending my Commonwealth belt on March 24.”

WARREN JOUBERT: “I’m delighted to get this shot at the Commonwealth belt. I’ve worked hard for a very long time, winning my national title and defending it against the best in South Africa and I believe I’ve earned my shot the hard way.

“I respect Josh Taylor for giving me this opportunity but I’m afraid it’s going to end in tears for the boy. He’s had it all his own way as a pro but that’s not going to be the case on March 24. I’m coming to win and I’m taking the title back to South Africa!”

SHANE McGUIGAN: “This is a must win fight for Josh. He’s made massive progress since he turned professional with us in 2015 and he’s learning all of the time in the gym. Josh has had some world class sparring recently out in Las Vegas and he’s learned so much from that experience.

“From what I’ve seen of Joubert he looks to be a tough cookie who isn’t just a one-dimensional pressure fighter. Josh will have to be at his best to look good against this guy and I’m very confident that he’ll produce another excellent performance on March 24.”

BARRY McGUIGAN: “This is going to be another enthralling night at the Meadowbank Arena and I’m delighted that it will be live and exclusive on Channel 5. Styles make fights and this one has all the ingredients needed to be a fantastic contest.

“It pits Taylor’s youth and improving skills against Joubert’s experience and ringcraft. Joubert was one of the Commonwealth Boxing Council’s selected contenders and we know that he will provide Josh with a stern test on March 24. The Edinburgh crowd were unbelievable last time Josh boxed at the Meadowbank and I can’t wait for another noisy night of championship boxing.

“It’s a huge night for Edinburgh boxing with Jason Easton in a big test against Hungary’s dangerous Zoltan Szabo and Connor Law taking on Germany’s wily Nico Salzmann. Edinburgh get ready, it’s going to be a genuinely unmissable night of boxing on March 24 at the Meadowbank Arena.”

JASON EASTON: “I’ve been asking for a good while for a step up in class and I believe that Zoltan Szabo is just that. He’s performed well over in Scotland before when he beat Stephen Ormond, and I know I’m going to have to be at my best on March 24. It was a fantastic atmosphere last time out at the Meadowbank and I know I’ll have a big crowd out to support me again on March 24.”

Doors will open at 5.30pm at the Meadowbank Arena in Edinburgh on Friday March 24, with boxing starting at 6pm. More information on the undercard will be announced shortly.

TICKETS FOR TAYLOR vs JOUBERT ARE ON SALE NOW FROM TICKETMASTER.CO.UK AND ARE PRICED AT £40 AND £60 + HANDLING FEES. VIP TICKETS PRICED £100 ARE AVAILABLE FROM CYCLONEPROMOTIONS.COM