Leo held an event this past Saturday at Last Round Bar & Grill in Ontario, CA where all fans were invited for a Meet & Greet with him, Music, Food, Raffles, Cake and so much fun. The raffle tickets were being sold weeks in advance and prizes consisted as, 3rd Prize was an autographed Canvas photo, 2nd prize was the fight worn gloves, 1st prize was the fight outfit and shoes worn for Frampton vs. Santacruz 2. Tickets were sold for $5 each with 100% of the proceeds of the proceeds going to WBC Cares and PADRES Contra El Cancer. Two organizations dear to Leo’s heart.

Padres Contra El Cancer is an organization committed to improving the quality of life for children with cancer and their families. WBC Cares Mission – Big Champs for Little Champs. “Boxing has no borders; we don’t care about skin colors, religions, politics, flags, languages. We all speak the same language; we all understand perfectly its universal voice. We all chat with our fists, with out hearts, with our souls; that’s what boxing is about.” 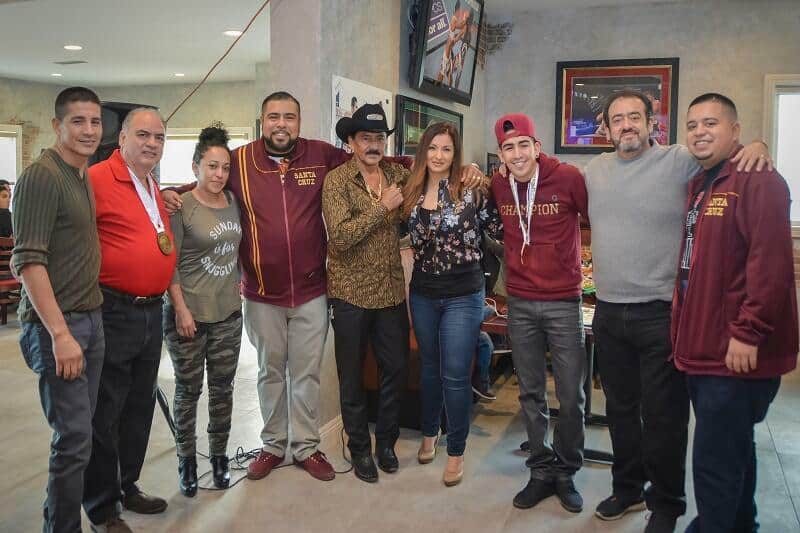 This great fan friendly event had many fans, family and friends of Leo Santacruz in a new Boxing based restaurant in Ontario, CA. There was a presentation done by Pepe Sulaiman and Nancy Rodriguez acknowledging the great work PADRES does for our community and Leo Santacruz as well. Also a special award was given to Leo Santacruz by City of Los Angeles Mayor Eric Garcetti, as well as a special WBC cake for all in attendance.

Leo Santacruz is definitely a Champion who has fallen and came back up to avenge a loss, who suffered through his Father’s cancer diagnosis and still went out and gave the Boxing World a great fight. Who has savored this win so much, because just like that it means Victory, but not only for him, for his Father, his Family, his fans, his community. Giving back was the only thing on Leo’s mind after his win, that shows the heart of a Lion, the heart of a Champion.