The two champions thoroughly entertained the New York crowd at the Barclays Center for the duration of the contest earlier this month, before the three ringside judges were ultimately unable to split them.

For his part, DeGale moves from 30th to 27th after further improving his reputation, whilst Jack prepares for his 175 pound debut nine places better off after showing his steel on the back of doubts due to his previous knockout at the hands of Dereck Edwards.

Even though the fans deserved a second helping, the pair go their separate ways (for now) a massive win away from cracking the top twenty. 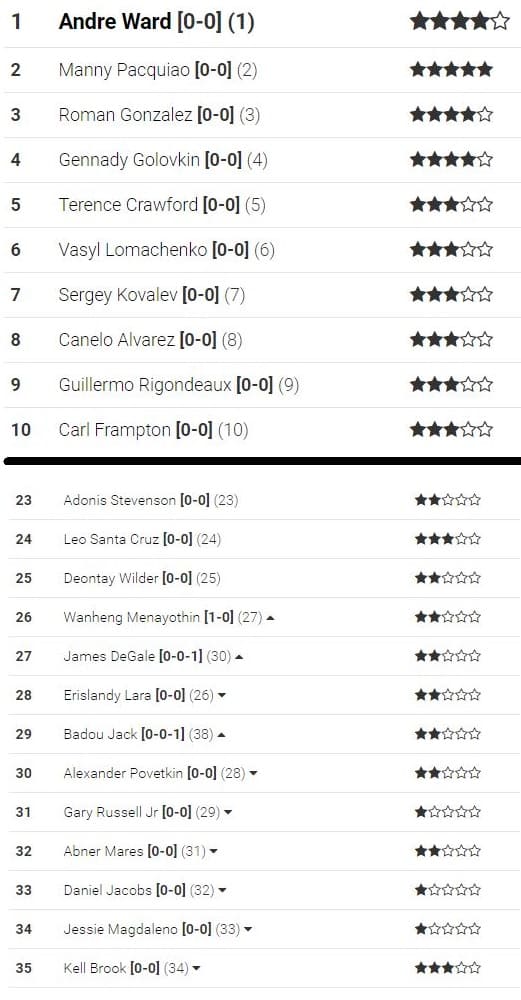 Also hovering around the mid-20’s is WBC minimumweight champion Wanheng Menayothin who successfully defended his green and gold belt for the sixth time on Wednesday.

The 31 year-old moved to 45-0 (albeit with some low-key victories pumping up his record) by defeating Melvin Jerusalem but moves only a solitary place due to the lack of a massive scalp at the weight.

Andre Ward remains at the helm, whilst Manny Pacquiao, Roman Gonzalez, Gennady Golovkin and Terence Crawford continue to make up the top five.

The first big shift could come this weekend when number ten-rated Carl Frampton battles 24th placed Leo Santa Cruz for a second time, whilst Dejan Zlaticanin will be able to crack the Top 50 with a win over Mikey Garcia, who sits at 42.

WBN’s pound for pound rankings are based on world title wins, multi-weight titles, calibre of opponents, manner of victories, longevity and activity in a calendar year.

Star ratings are based on achievement in the sport.

*Fighters who fail to arrange an upcoming fight for twelve months will forfeit their ranking.