Abel Sanchez, who has expertly overseen the startling rise of ‘GGG’ over the last few years, believes someone is getting knocked out when the two punchers trade blows to crown the best 160 pounder on the planet.

“First of all – to Danny, thank you for being a gentleman and a man of character,” Sanchez began.

“Three years ago when he won his title, I remember him saying he wasn’t ready for the elite, he needed more 10-12 round fights and then he would be ready for Gennady.”

“Once the fight was ordered Danny started talking like a champion should. These two fighters enter the ring with better than a 90% KO ratio, it’s fair to say that somebody is going out.”

“Andre (Rozier, Jacobs trainer) and I understand the importance and significance of this fight in the middleweight division and we look forward to matching wits. It’s all about getting the two best fighters in the ring to put on a great show for all of us.” 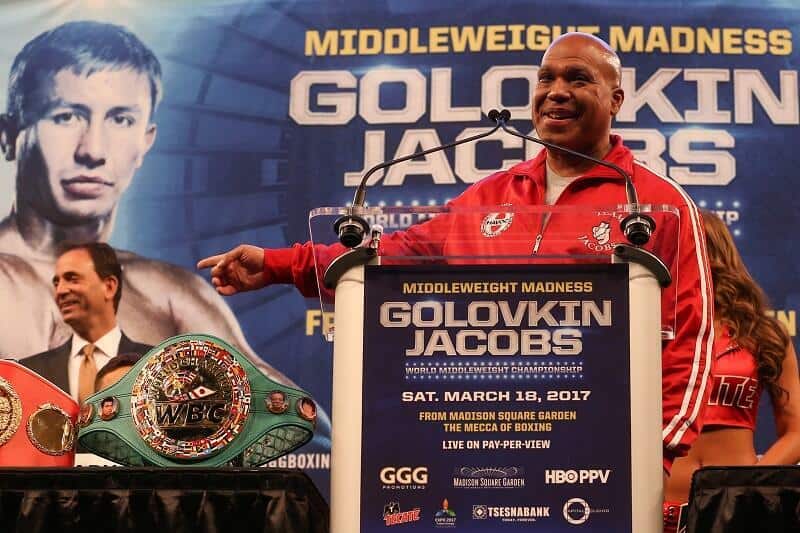 Rozier, himself added: “We’ve been told that we were running, that we were afraid, that we didn’t want to fight Gennady, I’m here to tell you that is entirely not true. This young man here, Daniel Jacobs, I call him my son. He has fought the hardest fight he could ever have, in life. Everything after that is a walk in the park because he fears no man.”’

“When he gets in the ring on March 18th, he will show all those who didn’t believe what he’s really about. We going to work hard and train hard, I’m a big fan of Gennady, he a class act, a gentleman but on March 18th I don’t’ know who he is, I don’t want to know who he is because my fighter has to inflict punishment and garner a victory. I won’t like him on March 18th, maybe after the fight I will.”