Seven specially arranged dates were pencilled in as part of his Undefeated Tour of Great Britain, which have now been extended to nine.

The 39 year-old, who retired in 2015, has been promising to revisit Europe for some time.

Firstly, Mayweather heads to Leicester Athena on Thursday, March 2 before moving on Stoke the day after. Birmingham’s ICC will host the American great on March4, before Mayweather heads to the Lancastrian Suite in Gateshead on Sunday, March 5. London’s Indigo O2 on the 6th is followed by Bristol on the 8th, and finally Liverpool’s Echo Arena-Auditorium on Friday, March 10.

Dates in Zurich City, Switzerland on the 11th and Belgium on the 12th finish off the ten day tour.

Tickets are available from all these venues ranging from £40 to the TMT Special Ticket, which includes 10 minutes with the man himself in a private room and costs £1000. 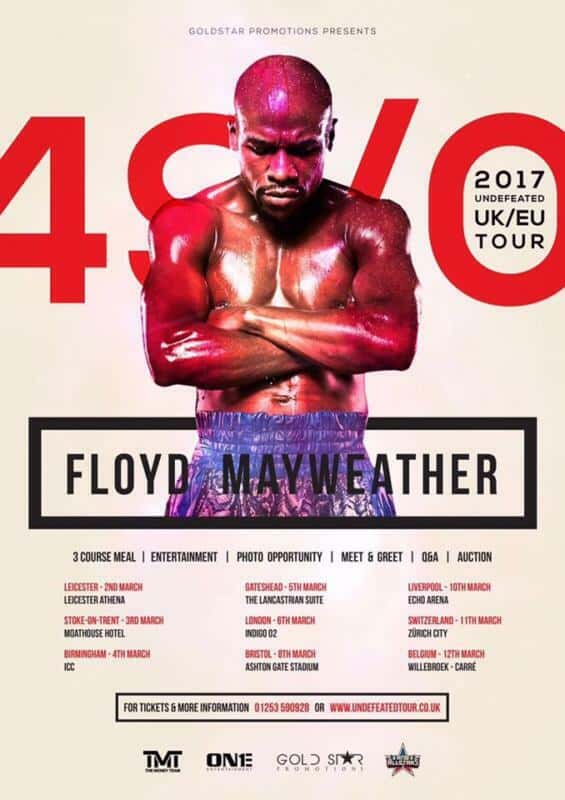 Mayweather topped the Forbes and Sports Illustrated lists of the 50 highest-paid athletes of 2012 and 2013, and the Forbes list again in 2014 and 2015, placing him as the highest paid athlete in the world.

In 2007, He founded Mayweather Promotions, his own boxing promotional firm after defecting from Bob Arum’s Top Rank.

A full rundown of ticket prices:

Silver Seated Package:
Table of 10 £600- Individual Tickets £65.00 each.
Excellent seats in the venue with a good view of the stage.
Chance to ask Floyd Mayweather a question.
45min Interview hosted by Johnny Nelson
2-course meal.
Early Access to the venue
Chance to bid on Floyd Mayweather Auction items.

Standard Seated Ticket: £40.00 each
Seated furthest away from the stage with a good view.
45 Min Interview hosted by Johnny Nelson
Chance to bid on Floyd Mayweather Auction items.
Doors open 8.30pm with this ticket.