Lomachenko, 28, out-fought and bamboozled the previously undefeated Jamaican at times and has now risen 25 places in the ratings since the turn of the year.

The amateur legend is a shoe-in to feature on the WBN Fighter of the Year nomination list to be announced after December 17 after a stellar and breakout year in the professional ranks.

Already a two-weight world champion after just seven fights, Lomachenko continued his progress towards a possible third weight title by his tenth.

Promoter Bob Arum is already planning for the coming year, which could see Lomachenko secure the number one position by the end of next year. 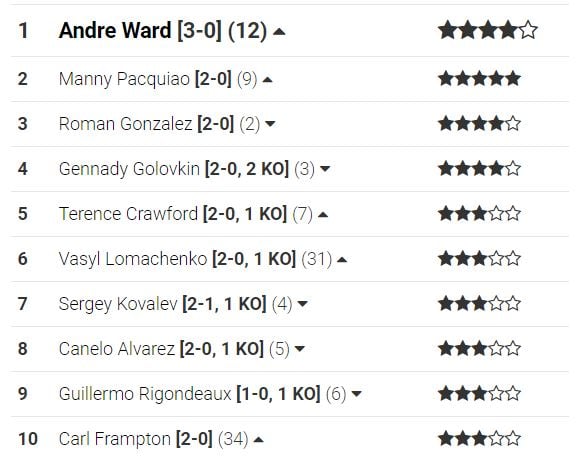 Fights against Terence Crawford or Manny Pacquiao loom large for Lomachenko, who is rated higher than Sergey Kovalev and Canelo Alvarez stemming from his latest triumph.

Light-heavyweight king Andre Ward is sitting on top spot after one of the most interchangeable months on the P4P list for some time.

Manny Pacquiao, who made it to the summit for two weeks earlier in November is currently lying second, whilst former king’s Roman Gonzalez and Gennady Golovkin are followed by two-weight world champion Crawford in making up the Top 5.