The 27 year-old also stated he would be ‘defending his title’s’ despite the fact that Fury is almost certain to be stripped of the WBA, WBO and IBO belts in his possession.

Fury’s problems have been well documented recently and his latest posts on social media seem to be another cry out for attention as the boxing world await an official decision by the organisations over his belts. 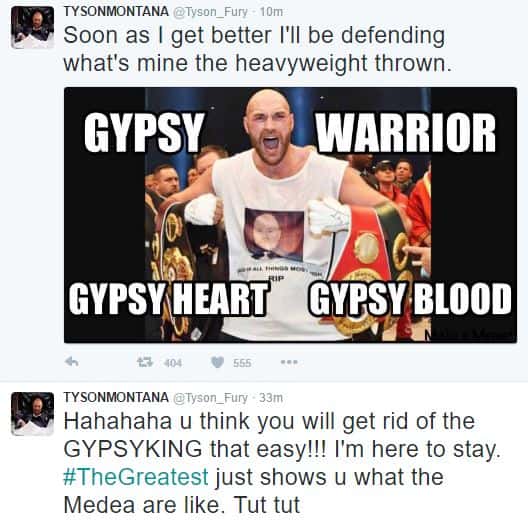 It’s not likely to be good news for Fury as a host of fighters line-up to take over a champion by the end of the year.

Joseph Parker is already said to be in serious talks with Andy Ruiz Jr. about possibly contesting the WBO belt, whilst the WBA have a tournament in place that could see Wladimir Klitschko, Luis Ortiz or Lucas Browne be handed the opportunity to battle for their strap.

The IBO have been quiet of the situation until they gather all the facts needed, whilst IBF title holder Anthony Joshua is being strongly linked to filling Fury’s shoes and facing Klitschko in 2016.

That would leave Fury without any status in the division as the Briton attempts to fight off his demons in a bid to re-enter the ranks next year.