Mayweather was afforded the top spot in WBN’s Pound for Pound Top 50 for twelve months after he announced his retirement due the amazing achievements the American secured in the ring.

Winning eight world titles in five weight divisions and boasting a standout record of 49-0, Mayweather is widely regarded as the best fighter of his generation following a stellar nineteen-year career.

Pay-per-view records tumbled time and again when Mayweather fought as fans tuned in not only to see the dazzling skills he possessed – but towards the end of his career, to see if any fighter had the ability to match him.

It proved not to be the case, and despite being linked to a return constantly, Mayweather has so far resisted calls for a comeback. 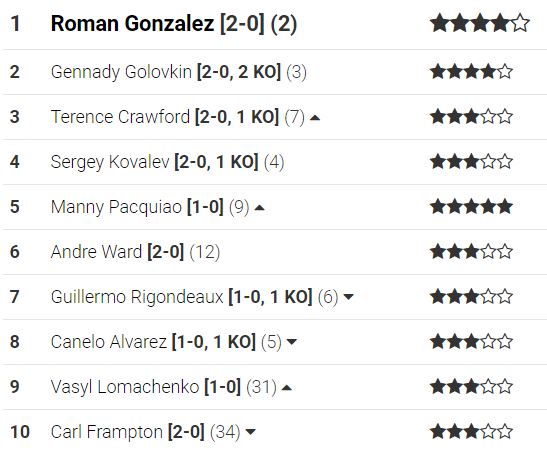 Victory on September 10th this year signalled the beginning of a new era as number two-ranked Roman Gonzalez edged middleweight king Gennady Golovkin to take over from Mayweather at the top.

Gonzalez won a fourth weight world title against Carlos Cuadras at The Forum on Saturday night, whilst Golovkin stopped Kell Brook in the fifth round at the O2 in London.

Should Mayweather eventually come out of retirement to fight for a 50th time, the boxing legend would then regain his place back at the summit with Gonzalez dropping back to second place.