Both fighters exchanged back and forth punches throughout the bout, keeping fans at Sam’s Town Live entertained until the final bell. The bout, which went the full 10 rounds, resulted in a unanimous decision victory in favor of Santiago as the judges saw it 100-90, 99-91 and 98-92.

Santiago entered the ring very confident as he was riding a nine-fight winning streak, but Ruiz relished his underdog role as he stood in the middle of the ring going toe-to-toe with Santiago from the first bell. Both fighters used their full arsenals, throwing jabs, upper cuts and significant body shots from start to finish. Santiago applied pressure with his jab, but Ruiz did not look phased as he did his best to counter and throw hard and fast combinations. The lightning quick speed of the two pugilists saw over 1,500 punches thrown combined throughout the fight with Santiago throwing 941 and Ruiz throwing 624.

“I think it was a good fight. Working with Ismael Salas has been great and made a huge difference in my performance,” said Santiago. “I definitely feel better with a better corner behind me.

“Everything went as planned, the game plan was to come out and box, we thought he was going to stay in the pocket and come forward and we wanted to use the ring and trade punches.

“Being the main event on Premier Boxing Champions on FS1 does a lot for me, gives me a lot more exposure, gives me a big opportunity. I really feel like I’m working towards hopefully getting a chance to go for a world title soon.”

Fresh off his two-week European Victory Tour, president of Mayweather Promotions Floyd Mayweather was seen ringside as he rooted for his fighters featured on the card. The fight was called by PBC on FS1 fixture Brian Custer who was joined by former welterweight world champion Shawn Porter and his father Kenny. Porter provided his expert first-hand knowledge of the sweet science as he and his trainer/father took a break from preparing for his March 12 SHOWTIME Championship Boxing on CBS presented by PBC mega-fight against welterweight champion Keith Thurman. 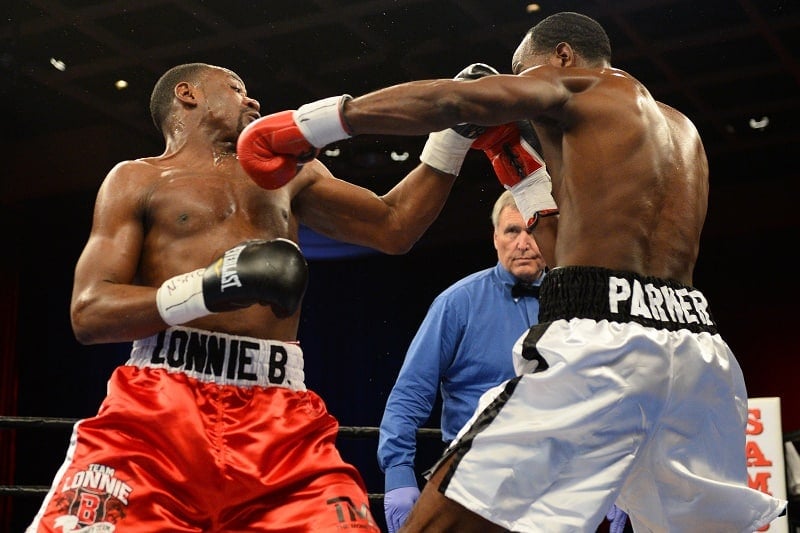 Light heavyweight Lionell Thompson (16-4, 10 KOs) of Buffalo, NY made his Mayweather Promotions debut in a tight eight-round bout against Paul Parker (8-1, 4 KOs) of Toledo, OH. Following a close first round, Parker began to outwork Thompson, throwing more punches as he utilized his significant height and reach advantage. The action picked up in the third round when Parker threw a hard right hand that caused Thompson to touch the canvas with his glove that was ruled a knockdown by referee Jay Nady. As the fight progressed, Thompson picked up his pace, forcing Parker to step in and exchange. While the fight went the distance, the third-round knockdown was the difference on the judges’ scorecards, awarding Parker a close split decision with scores of 76-75 twice and 76-75 for Thompson.

“I knew he was a good boxer. I’ve seen him box forward and back so I had to plan my game plan accordingly,” said Parker. “I drained myself in my last fight and figured he’d box me and pressure me so I get tired. I was working on throwing combinations since he likes to jab.

“My biggest advantage was my straight punches and my pressure coming forward,” continued Parker. “I was throwing more power punches I believe. Trying to block the jab. I knew I had him with my reach advantage. Knew his jab was coming from up top and bottom so I was looking for it.

“Fighting on a PBC card on FS1 and FOX Deportes feels great. It allows me to secure more fights and become better known.”

“I think it was a bad decision because I landed more, worked him, was busier, pressed the pace and made him fight how I wanted him to fight,” said Thompson. “If you want to give him the earlier rounds, that’s cool, but not the rest. He even thought I won. He said to me, ‘I thought you outclassed me and thought you had it but I’m not a judge.’

“I want to just get back in and train again, move forward,” continued Thompson. “I have faced adversity all my life, so every negative I turn into a positive.”

Lanell Bellows (15-1-1, 8 KOs) of Los Angeles made his national television debut to kick off the telecast in an eight-round super middleweight showdown against Antowyan Aikens (10-1-1, 1 KO) of Atlantic City. A proud member of the Mayweather Promotions’ stable of fighters, Bellows worked his jab effectively from the beginning of the bout. Bellows started to really show the power behind his punches in round three as he aggressively stalked Aikens around the ring, continuing to throw his jab. In round five, Bellows threw a powerful right hand that sent Aikens to the canvas which caused referee Tony Weeks to wave off the bout at 2:08 of the round.

“My game plan was to win,” said Bellows. “I was expecting to get the knockout, but as we went to fourth round noticed he wasn’t punching as much, he was playing it safe so I knew I had to press to get some action.

“I trained hard and really prepared for this fight. I was getting frustrated because his lack of activity was starting to frustrate me because he was running too much.

“I’m ready for whatever Mayweather Promotions puts in front of me. Any fight that keeps me moving and brings positive progression to my career.”

This installment of PBC’s TOE-TO-TOE TUESDAYS on FS1 and BOXEO DE CAMPEONES on FOX Deportes was promoted by Mayweather Promotions and sponsored by Corona.