It was the first title defense for DeGale, the 2008 Olympic gold medalist from Britain who went on the road to Boston to win the title earlier this year and chose to defend in hostile territory.

Bute, who was attempting to win back the IBF belt he defended nine times between 2007 and 2012, put on an inspired and gutsy performance in an electric atmosphere to open the new Videotron Centre in Quebec City. But the unbelievable pace, as well as an arsenal of overhand rights, body shots and combos from the younger DeGale (22-1, 14 KOs) proved to be the difference as DeGale prevailed 116-112, 117-111 (twice).

“I’m young and I’m fresh. I’m peaking right now,” DeGale said. “I’m ready for the best in the world. Credit to Bute – he’s a great champion and believe me, he will be back.”

“Like I’ve said in the past, he is a world-class fighter. I’ve still got things to work on in the next three or four years and I’m going to be my best.”

Bute (32-3, 25 KOs) didn’t look anything like the fighter that lost to Carl Froch in 2012. But while the 35-year-old stalked the switch-hitting DeGale with a relentless attack, he couldn’t do enough to overpower the supremely active Brit, who threw 524 power punches compared to 278 for Bute.

“The last three years were difficult for me. After I lost to Carl Froch that was a very difficult period for me. I took a break, and now I’m back. I feel great, I feel healthy and now I have one more chance to be back on the top.

“Maybe a few rounds I waited too much and didn’t put the punches together and I let James fight me. When I pushed pressure and pushed back I won the round.”

Alvarez, ranked No. 2 by the WBC at 175 pounds, started quick and pocketed rounds against the No. 1 ranked contender Chilemba. But Chilemba weathered the storm and fought his way back in the fight as Alvarez couldn’t keep up the pace he established in the earlier rounds.

Both fighters came out with a sense of urgency in the 12th and deciding stanza and if Chilemba had won the final round the fight would have been ruled a draw.

“I knew I had to finish the later rounds strong, but I believe I did enough to win the fight,” Alvarez said. “I’m ready to accept the challenge and face Stevenson. To be the world champion, you have to beat the champion. So that’s what I aim to do.”

Chilemba argued that Alvarez, who fights out of nearby Montreal, was the beneficiary of a “hometown decision,” although the judge who ruled the fight a draw was a local and the other two were from neutral territories.

“I thought I did enough to win it,” Chilemba said. “But it is what it is. I guess you can call it a hometown decision.” 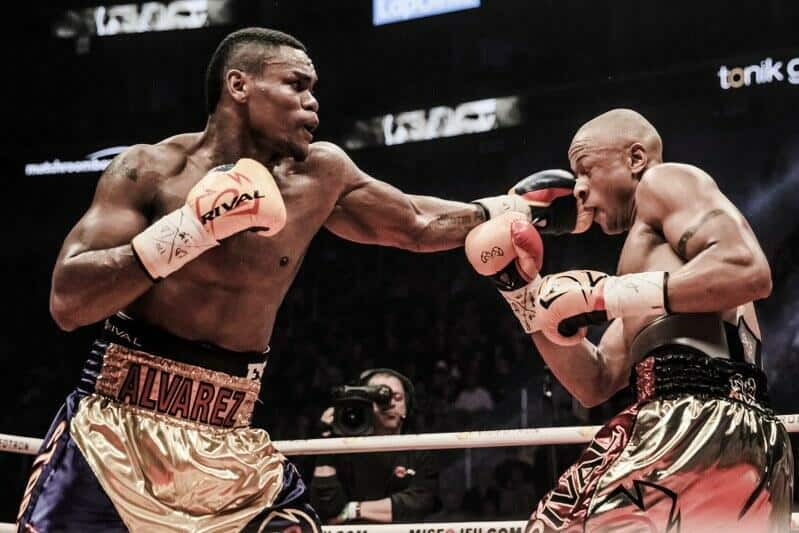 After the fight, SHOWTIME Sports host Brian Custer sat down with Stevenson to get his thoughts on Alvarez-Chilemba and his future.

“It was a close physical fight,” Stevenson said. “He (Alvarez) won this fight but it was very close.”

“We talk about Kovalev because the WBC still ranks him the No. 1 contender. I want this fight to happen. The fans want it to happen. I said June is perfect for me. He said ‘OK, June,’ Kathy Duva said ‘No problem, June.’ Then she said on HBO. I said, ‘Forget about the TVs, let them talk.’ We want the fight to happen. Let the TVs work together and make it happen.

Adrian Granados survived a first-round knockdown to shock undefeated super lightweight prospect Amir Imam in the opening bout of SHOWTIME BOXING ON SHO EXTREME with an eighth round TKO (2:34).

It was a crushing defeat for Imam, who entered the fight as the No. 1 mandatory challenger to WBC Super Lightweight World Champion Viktor Postol.

Imam looked like he was going to finish the fight early after a nice left-right combo floored the Chicago native. But after escaping the first, Granados dictated the tempo of the fight, worked the inside and prevented Imam – considered one of boxing’s most talented young contenders – from establishing his jab. With Imam unable to keep the fight at a distance, Granados picked apart the Don King-promoted fighter. After seven rounds of punishment and Iman gasping for air against the ropes Granados finished his opponent with a series of devastating combo shots.

An elated Granados (15-3-2, 10 KOs), who has losses to fighters with a combined record of 49-0, pleaded his case to become the mandatory challenger.

“I believe I should be the mandatory challenger,” Granados said. “He was in line and I stopped him. What does that mean? Come on. I was the underdog, but I just came to take it. I came to take it.

“It feels great. Once I had him wobbled I was like, ‘you’ve got to get him now. This time you’re not taking it from me.’ It was a flash knockdown. He caught with the right hand, but I was alright. I just popped right up and I knew he was going to try and finish me. We got out of it and went right back to work.”

Despite the demoralizing loss, Imam (18-1, 15 KOs) doesn’t regret taking a fight that will likely knock him out of title contention.

“I know people might say I shouldn’t have taken this fight, but I needed this fight in between as a tune-up for my next fight because I didn’t want to wait for the six to eight months for the world title shot.

“The key to the fight was my jab, I just didn’t use it enough,” Imam said. “But that’s the way it goes and I’m going to definitely come back stronger. I wasn’t thinking anything after that first-round knockdown. I’ve done that many times and didn’t think the fight was over. I wasn’t surprised at all by the way he came out. I know how he fights. He’s a good fighter and that’s all there is to it.”

In the opening bout of SHOWTIME BOXING ON SHO EXTREME, undefeated heavyweight prospect Oscar Rivas (18-0, 13 KOs) knocked out veteran Joey Abell (31-9, 29 KOs) at :46 of the second round.