“Freddie is the biggest compliment I have in my career. He has made me a better boxer. After this next fight, you are going to really understand what he has done for my career.

“I am not disappointed by the WBC’s decision [to strip Cotto of his title]. It was all about money. The fee for this fight was absurd to me and I prefer to keep the money in my account. I don’t need to pay attention to Oscar De La Hoya’s opinion. He should take care of his own business. And I will take care of mine. I don’t stick my nose in Oscar’s business.

“The organizations wants four champions in every division just to earn a percentage from
everybody. Then we have to pay for their mistakes. This is not fair to me. The WBC told me my offer was not reasonable to them. They told me I was not going to be the champion anymore. I don’t need their belt. I have enough belts in my house and with the money I saved, I can buy any belt I want. I can be the champion of whatever I want in my house.

“This fight sells itself. Everybody should know what to expect from Canelo and what kind of fight they can expect from me. I know I have everything I need to beat Canelo.

“I don’t want to be in the sport for that much longer. I see two or three more fights andthat will be all.

“Training is all about discipline. Everyone knows that Freddie has Parkinson’s Disease. You never hear any complaints coming from Freddie. This man, Freddie Roach, gave me the tools I needed in my career and he made me work as hard as I can. Freddie made me look the way I looked during our last few fights.” 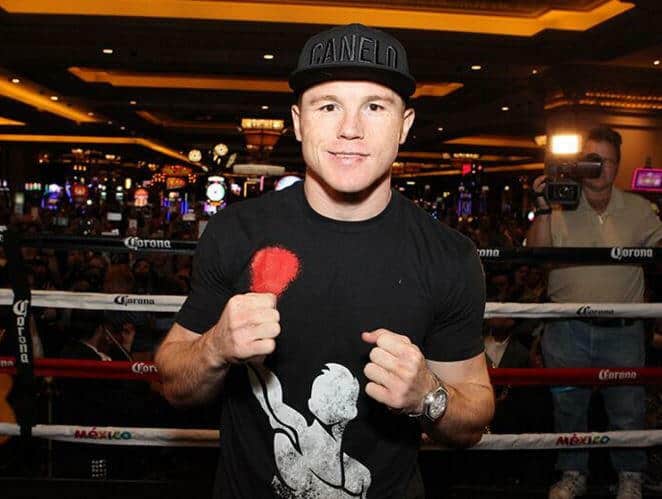 “I understand the magnitude of this fight and what it means for the history of Puerto Rico vs. Mexico. I know this fight will go down as one of the most exciting and explosive nights in the famed rivalry and in the sport of boxing.

“I am very prepared for this fight. I have full confidence in my trainers and their approach to this fight. People can expect a great fight that will be talked about for years to come.

“I am doing this for my fans, for my country and for history.”

“Miguel trains with all he has. We’re in the gym every morning at 5:00 a.m. for conditioning work and that lasts for three hours. Then at 1:00 p.m. we have our boxing workout. We work really hard every day.

“Before I go to sleep every night, I run through my thoughts, and make sure I have everything covered. There’s not one aspect of the fight that I don’t think about. We cover all our bases. And we’re 100 percent ready for this opponent. Canelo makes a lot of mistakes. And we’re really going to take advantage of those mistakes. He has youth on his side. But that’s not going to be enough to beat us.

“Miguel is bigger than the belt.”

“I have had the privilege to see Canelo grow into the man that he is and I know that he is ready for this fight. He has been preparing for this night his whole life.

“Canelo is a strong, intelligent fighter, with a lot of heart and that will show on fight night. I know he will raise up his hands in victory for Mexico.”

“We are very well prepared for this fight. Canelo is a strong fighter who is getting better every day. On fight night there will be fireworks in the ring.

“We are very confident in Canelo’s abilities. He is someone with no limitations and will go down in history as legend after his victory on Nov. 21.”

A limited number of tickets priced at $2,000, $1,750, $1,250 and $650, not including applicable service charges, can be purchased at the Mandalay Bay box office, ticketmaster.com, mandalaybay.com, all Ticketmaster locations or by calling (800) 745-3000. Ticket orders are limited to four per person.