The 30-year-old pushed his impressive record to 23-1 with a seventh stoppage in 11 wins at the 130 pound limit following a rampaging beatdown of Italian dangerman Devis ‘Boom Boom’ Boschiero on home soil in Liverpool.

From the off, ‘Swifty’ gave himself the upperhand with a swinging left hook around the back of Boschiero’s elbow and set the scene for a famous win at the Olympia for one quarter of the Smith British boxing dynasty.

Smith explained to WBN that a change in tactics during camp was the instigator for his relentless body attack on Boschiero, 34, and says he was fully focused on making a real statement with his performance in what was a final eliminator bout with the International Boxing Federation.

“I think the result was the most important thing, but personally I wanted to perform to show I’m not just done with getting a world title shot,” Smith told World Boxing News.

“I wanted to prove that I could also go out and win a world title and that I am fully capable of that.”

Outlining a conversation with trainer Joe Gallagher in the build-up, Smith added that the fight could have played out a lot differently than it initially did by adding: “It was actually halfway through camp and Joe came up to me and said; ‘Look, he doesn’t like it to the body. I’ve been watching him and every time he gets hit with a clean body shot he’s not the same for the rest of the round.’

“I was a bit shocked that he came out with that as you don’t usually change much mid-camp. You usually get set on the shots he wants you to throw and what he wants you to avoid before that. So I went home and watched the round Joe told me to watch and I agreed with him that there was definitely something to it.

“When we got in there, the plan was to use my boxing ability, but also to sink body shots in now whenever I get the chance to see how he reacts. And from the very first one I landed, I knew I could get a reaction out of him. From the noises he was making, I knew he didn’t like it and I took confidence in that from round one.”

Even with a plan to slow Boschiero down with a downstairs assualt, Smith would put the ex-European champion down with a punch-perfect right hand to the side of his opponent’s head, a shot that the Merseysider thought may well have ended the contest there and then in the only the second round.

“I wasn’t surprised that the shot put him down because I know I can punch and if I catch any super featherweight in the world I’ll hurt them,” said Smith.

“It’s more to the fact that Joe was telling me to avoid that side of him because he’s always looking for his right hand in order to finish off with the left hook. It was actually due to the fact that we were both committed with the right hand that I landed that shot and I was laughing after it that it was that one that actually put him down first of all.

“I was just happy that I landed flush so early because that was the plan as we thought he had a bully mentality where he is better when he’s on top and landing. I didn’t think he’d be the same when someone smacked him back early. I knew it was a big shot and if he gets up there’s a chance I could finish him. I honestly didn’t think he’d get through the round as he was down and down heavy. The fact that he got through the round was testament to his fitness and proves he’s a tough man.” 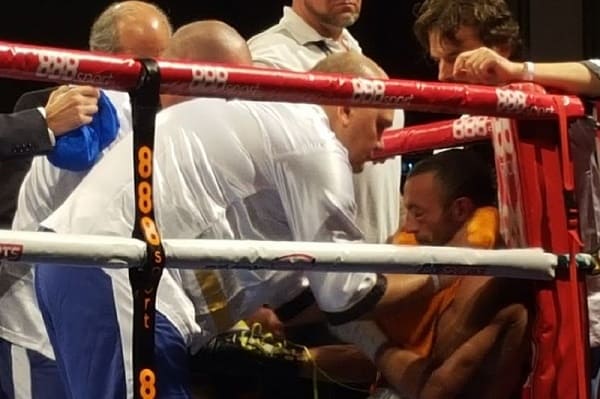 Boschiero came out for the third round with a badly swollen left eye that clearly affected his confidence in the fight and Smith by that time already knew the writing was on the wall and that his future world title chance was almost guaranteed.

“When his eye swelled up in the third it was annoying me to be honest because I didn’t want people to think I was just landing because he can’t see out of his eye. I was landing good clean shots on him anyway with two good eyes.

“After that, in the third round, I sought of switched off a bit as I thought Boschiero didn’t want to know as I didn’t land a shot and he went down. I even said the referee at that time he didn’t want know.

“But I think he landed a good shot after that at the start of the fourth round or fifth and I thought; ‘Hang on, I’ve got to keep switched on here or I might let him back in this fight.’

“Once I got back into my rhythm, though, it was only a matter of time,” he added.

New IBF number one Smith, along with his trainer Gallagher, will have a keen eye on Pedraza v Cherry when the encounter takes place on October 3 in Cincinnati, Ohio and should conceivably be opposing the victor by January or February next year.