Smith, 30, began well and seemed eager to get the upper hand early, whilst Boschiero struggled to keep pace with ‘Swifty’ as the Olympia crowd sensed something special was about to happen.

That came in the second round when a cracking right hand from Smith put Boschiero down and almost out, as the home fighter gestured to the crowd at how devastating a punch he’d just managed to land.

Boschiero was clearly in trouble and was forced to the canvas again a short time later as Smith piled on the pressure in his bid to finish the contest. Boschiero attempted to rally, although Smith was never out of his comfort zone and was able to connect with heavy shots almost at will.

Coming out for the fourth round, Boschiero’s left eye had begun to swell horribly and was affecting his vision as Smith teed off with crushing right hands. Referee Howard Foster, who was guilty of interfering a little too much in the fight, called in the ringside doctor in the fifth round to run the rule over the damage as the Merseyside fans sensed that the end was near. 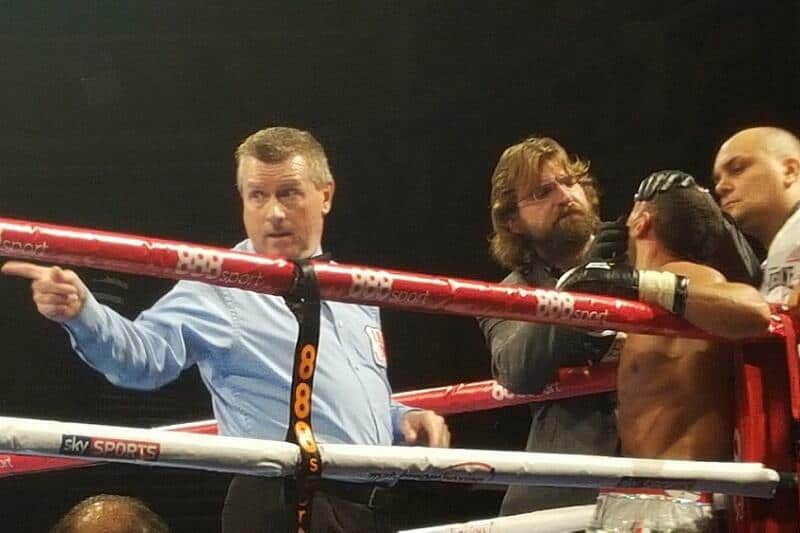 More combinations followed from Smith in the sixth, but this time it was the body shots that the former British champion had used all night to break Boschiero down that caused the major hurt, leaving the 34 year-old with no choice but to cower on the floor when trapped in the corner.

The body shot produced by Smith was a world class shot and it could be argued would have put any of the top contenders at 126lbs in trouble and saw Boschiero take an eight count before immediately attempting to take another knee. Official Foster had none of it though and told Boschiero to continue, although just seconds later the bout was over as Smith was relentless in his barrage and wouldn’t stop until the clash was halted.

It was a top quality victory for Smith, who is improving with age and can now look forward to a challenge against the winner of the October 3 contest that sees current champion Jose Pedraza lock horns with Edner Cherry in Ohio.